Kids Encyclopedia Facts
This page is about the town in Rhode Island. For other areas of the same name, see Barrington.

Barrington (pronounced) is a suburban, residential town in Bristol County, Rhode Island. As of the 2010 United States Census, the population was 16,310. Located approximately 7 miles (11 km) southeast of Providence, the town was founded by Congregationalist separatists from Swansea, Massachusetts.

Following its incorporation in 1711, Barrington was ceded to Rhode Island and merged into Warren, though its independence was later restored by the Rhode Island legislature. Barrington was a sparsely developed, agricultural community until the arrival of brickmaking companies in the 1850s, which employed large numbers of French-Canadians and Italians. The construction of a railroad to Providence in 1855 further contributed to suburban development, attracting residents of neighboring urban areas and contributing to the development of manufacturing industries. Along with the increasing availability of the automobile, the baby boom furthered existing suburbanization trends, resulting in a large population increase.

Schools were constructed throughout the 1950s to accommodate this population. Three Barrington schools are National Blue Ribbon Schools, and its high school was ranked No. 200 in the United States by Newsweek in 2014. Money noted the appeal of Barrington's high test scores and relative affordability, naming it one of the best places to live in the United States.

Historical sites, including the Allen-West House, Barrington Civic Center Historic District, and O'Bannon Mill, provide examples of architectural and suburban development during various stages of the town's history. Nine sites in Barrington are listed under the National Register of Historic Places, a listing of sites, buildings, and areas deemed worthy of preservation by the United States federal government.

The land that comprises modern-day Barrington was originally occupied by the Wampanoags, whose territory spanned Narragansett Bay through Cape Cod. Epidemics of disease brought by European colonists largely eliminated their coastal settlements; the Wampanoags' main settlement at the time of the Plymouth Colonists' arrival in 1620 was an area roughly corresponding to Bristol, Barrington and Warren. The Narragansett term for the area, Sowams, is usually used to refer to this area. In 1653, investors from Plymouth Colony bought "Sowams and Parts Adjacent" from the Wampanoags, a territory roughly corresponding to modern-day Barrington with portions of Bristol, Warren, and Swansea. Some areas in Barrington draw their name from the initial proprietors of this land, such as Prince's Hill, named for Thomas Prince. Thomas Willett, another early proprietor, was responsible for the establishment of a Baptist church at Nockum Hill.

Religious differences between settlers of Sowams and the neighboring Wannamoissett and Rehoboth prompted the incorporation of Swansea in 1667. Plymouth created Bristol County in 1685 to improve administration of western lands, which was followed by a merger of the Plymouth and Massachusetts Bay colonies orchestrated by the British government. Baptist residents petitioned for separation from Swansea in 1711, and Barrington was incorporated as an independent town in 1717. Barrington likely received its name from Barrington, Somerset, the origin of several English settlers. Barrington was ceded to Rhode Island in 1747, and made a part of Warren, Rhode Island. In 1770, its independence was restored by the Rhode Island legislature. 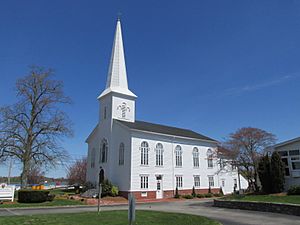 Shifts in influence between northern and southern portions of Barrington resulted in relocation of the Congregational Church (pictured).

Religion continued to influence Barrington politics. The new Congregational Society was formally declared the town's religion, following Massachusetts custom. Until 1797, taxes supported the Congregational minister, who was employed by the town meeting. Baptists and other religious groups were given the option of supporting their own meetings in 1728. In 1737, discussions regarding a relocation of the Congregational church proved divisive amongst the southern and northern portions of Barrington. The southern area was the historical center of town, hosting the Congregational church and buildings by the original Sowams proprietors. However, rapid increases in population shifted influence northward; abundant marshland and fertile soil allowed northern farmers to establish large, successful farms. Ultimately, the church relocated to the north, using a lot provided by Joshua Bicknell along County Road. The combination of commercial establishments (mainly taverns and inns) and farmhouses near the relocated church furthered the north's development.

The railroad from Providence constructed in 1855 led to the development of commercial and public facilities.

In 1847, Nathaniel Potter founded Nayatt Brick Company, which used the extensive clay deposits in Brickyard Pond. The company was reincorporated as the Narragansett Brick Company in 1864, and a competitor, the New England Steam Brick Corporation, was founded in 1890. Brick production resulted in road-building, visits from nearby seafaring vessels, and other such economic activity. The original employees of these companies were of mainly French-Canadian descent, but as a result of economic depression in the 1880s, some Italians migrated to the United States; a few hundred came to Barrington and worked at the brickyard. Their descendants still make up a significant portion of the town population. Barrington's population grew from 850 in 1850 to 3697 in 1920, mirroring overall trends in Rhode Island. Clay deposits began to deplete in 1900, and by 1930 brickmaking operations had ceased.

The construction of a railroad between Bristol and Providence in 1855 allowed residents to commute to Providence, resulting in an increasingly suburban atmosphere. The railroad led to the creation of several manufacturing industries in West Barrington, such as O'Bannon Mill and Rhode Island Laceworks, the latter providing commercial firefighting services for the town. New public facilities, such as a high school, town hall, and library, were also constructed during this period. Developments such as the Barrington Yacht Club and a golf course at Nayatt (now Rhode Island Country Club) catered to wealthy residents of neighboring urban areas, who came to Barrington in the summer as a result of its location near the shore and proximity to large cities.

Manufacturing establishments continued to operate in West Barrington throughout the 20th century; manufacturing employees were mostly of Italian and English descent, although significant numbers were Portuguese, originating from nearby Warren, Rhode Island and Bristol. Throughout the 1930s, the Neweth Rubber Company produced retread tires, but its building burned down in the 1940s and was not rebuilt. Rhode Island Laceworks continued to operate until 1990, when its owners deemed profits insufficient. The 1938 New England hurricane caused considerable damage to homes along the shoreline and pleasure craft, and railroad service was discontinued shortly afterwards.

Trends towards suburbanization continued, spurred by the availability of the automobile and the later post–World War II baby boom. Commercial establishments on County Road further reduced the need for outside travel, and significantly altered the existing town landscape. Barrington Shopping Center, constructed in 1948, included a supermarket, pharmacy and bank; two smaller shopping centers were constructed afterwards. Six new schools, which comprise the modern education system of Barrington, were constructed throughout the 1950s. Town services grew, with the establishment of a police force in 1934 and a fire department in 1953. Rapid population growth lead the town to adopt a council-manager charter in 1960. New churches also opened, accommodating Roman Catholic, Baptist, Methodist, and Presbyterian citizens. In the 1980s, the East Bay Bike Path was constructed along the former railroad lines connecting Providence to Bristol. In the 1990s, a lawsuit by the American Civil Liberties Union (ACLU) was brought against the town for its Christmas display, which featured a crèche. The town removed the display, and an individual placed a privately-owned scene on the road neighboring the town hall. Similarly, a lawsuit filed in 1996 by the ACLU regarding the town's decision to plow church parking lots for free was not contested. Barrington was the sole "dry" town in Rhode Island until 2011, when the town council approved 2 liquor stores.

As of the 2010 United States Census, Barrington had a population of 16,310. Barrington is a predominantly white community; 94.7 percent of residents were white at the 2010 census.

There were 6,011 households out of which 40.3% had children under the age of 18 living with them, 68.7% were married couples living together, 7.6% had a female householder with no husband present, and 21.6% were non-families. 18.8% of all households were made up of individuals and 10.0% had someone living alone who was 65 years of age or older. The average household size was 2.73 and the average family size was 3.14.

Historical locations and points of interest

Nine residential and commercial developments from the town's early suburbanization are listed on the National Register of Historic Places, a record of important historical sites in American history.

The Allen-West House, among the oldest houses in Barrington, stands on grounds farmed from the 17th to 20th century. A rare, well-preserved example of a vernacular house plan, it serves as an example of architecture from Barrington's agricultural era. Alfred Drowne Road Historic District and Jennys Lane Historic District are historical subdivisions that developed during the late 1800s and early 1900s, having attracted residents from neighboring urban communities. Rhode Island Country Club was constructed by Donald Ross in 1911, and since 1999 hosts the CVS Charity Classic annually.

The Barrington Civic Center Historic District in central Barrington includes Prince's Hill Cemetery, Barrington Town Hall, and the Leander R. Peck School, the last now housing the library and town senior center. Barrington Town Hall, described by the architects as "medieval", was originally used as the town's seat of government, library, and school; with the construction of Leander R. Peck School in 1917, the school moved and the library took its space. The T-shaped Elizabethan-Revival Peck School, which features a stairway to access its main entrance, was repurposed as the Barrington Public Library in the 1970s.

Nayatt Point Lighthouse, adjoined with its corresponding dwelling, served to guide vessels along the Providence River, marking the narrow passage between Nayatt and Conimicut Point. St. Matthew's Episcopal Church, founded by an Episcopal mission in the 1880s, mixes both Queen Anne and Gothic Revival-style architecture. Belton Court, built for Frederick Peck, a businessman and Rhode Island politician, was the site of two colleges before being auctioned to a Massachusetts investor who intends to repurpose it as elderly housing. O'Bannon Mill, among the first mills to mass-produce imitation leather, went through three purchasers before being converted into elderly apartment housing in the 1990s.

Barrington is located on the eastern side of Narragansett Bay, in Bristol County, Rhode Island, the third smallest county in the United States. Situated 7 miles (11 km) southeast of Providence, it consists of two pensisulas divided by the Barrington and Warren rivers. The shoreline of the western pensisula, Phebe's Neck or Popanomscut, is marked by many coves and indentations, making a sharp bend at Nayatt Point. Rumstick Neck, located around one and a half miles east of Nayatt, forms the southern end of Phebe's Neck. To the northeast of Phebe's Neck lies the second peninsula, New Meadow Neck, which is bordered by Hundred Acre Cove and the Palmer River. According to the United States Census Bureau, Barrington has a total area of 15.4 square miles (40 km2), being composed of 8.2 square miles (21 km2) land and 7.2 square miles (19 km2) water.

Barrington lies on a low, mostly flat plain bordering the sea. This plain, composed mostly of layers of clay, gravel, sand, and silt soils, was formed by a melting glacier towards the end of the last ice age. Bedrock underlying the soil is largely composed of shales, sandstone, and conglomerate rock, with some outcrops of quartz. A few extremes in elevation, such as Nayatt Point, Primrose and Prince's Hill, rise to heights of fifty feet.

Freshwater bodies in Barrington include artificial ponds originally used for brickmaking and some minor streams. Clay deposited by the glacier near Brickyard Pond are exposed to tidewater at Mouscochuck Creek, which was used as a canal for brickmaking operations. Two other artificial ponds, Echo Lake and Volpe Pond, exist along this area; a third, Prince's Pond, drains into the Barrington River in the northeast.

All content from Kiddle encyclopedia articles (including the article images and facts) can be freely used under Attribution-ShareAlike license, unless stated otherwise. Cite this article:
Barrington, Rhode Island Facts for Kids. Kiddle Encyclopedia.