Bristol County is a county located in the U.S. state of Rhode Island. As of the 2010 census, the population was 49,875, making it the least populous county in Rhode Island. In terms of land area it is the third smallest county in the United States, at only 25 square miles (65 km2). The county was created in 1747 when it was separated from Bristol County, Massachusetts.

The county was formed by the transfer of part of Bristol County, Massachusetts, to the state of Rhode Island, and was the subject of a long-running border dispute.

The original county was part of the Plymouth Colony and named after its "shire town" (county seat), what is now Bristol, Rhode Island. The new Rhode Island county was formed in 1746 with the full modern territory of Bristol, Barrington, and Warren.

According to the U.S. Census Bureau, the county has a total area of 45 square miles (120 km2), of which 24 square miles (62 km2) is land and 21 square miles (54 km2) (46%) is water. It is the smallest county in Rhode Island. In land area only (water area omitted), it is the third-smallest county in the United States, following Kalawao County, Hawaii and New York County, New York (Manhattan), if independent cities of Virginia are not counted as counties. The highest point in the county is Mount Hope, in Bristol, which stands 217 feet (66 m) above sea level. 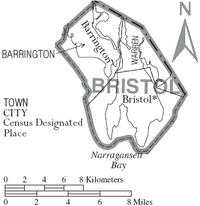 The following towns are located in Bristol County:

All content from Kiddle encyclopedia articles (including the article images and facts) can be freely used under Attribution-ShareAlike license, unless stated otherwise. Cite this article:
Bristol County, Rhode Island Facts for Kids. Kiddle Encyclopedia.