Newport County was constituted on June 22, 1703, as one of the two original counties of the Colony of Rhode Island and Providence Plantations. As originally established, Newport County consisted of four towns: Portsmouth, Newport, Jamestown, and New Shoreham. In 1746-47, two towns, Little Compton and Tiverton, were acquired from Massachusetts. In 1856, the town of Fall River was split off from Tiverton but was ceded to Massachusetts six years later in 1862 as part of the settlement of the boundary dispute between Rhode Island and Massachusetts. In 1963, the town of New Shoreham was transferred to Washington County. County government was abolished in Rhode Island in 1842 and today remains only for the purpose of delineating judicial administrative boundaries. 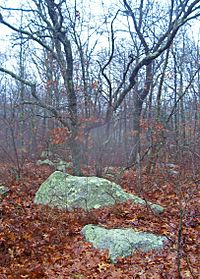 Summit of Pocasset Hill, highest point in the county

The county consists of Aquidneck Island, Conanicut Island, Prudence Island, and the easternmost portion of the state on the mainland. The highest point in the county is Pocasset Hill, 320 feet (98 m) above sea level, located in Tiverton. The lowest elevation is at sea level. 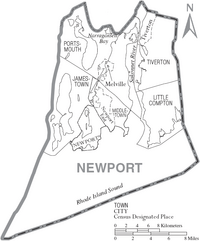 Villages have no separate corporate existence from the towns they are in.

All content from Kiddle encyclopedia articles (including the article images and facts) can be freely used under Attribution-ShareAlike license, unless stated otherwise. Cite this article:
Newport County, Rhode Island Facts for Kids. Kiddle Encyclopedia.