Jamestown is a town in Newport County, Rhode Island in the United States. The population was 5,559 at the 2020 census. Jamestown is situated almost entirely on Conanicut Island, the second largest island in Narragansett Bay. It also includes the uninhabited Dutch Island and Gould Island. 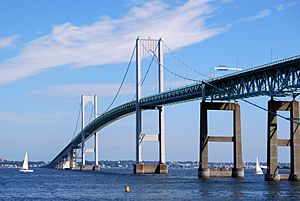 The Newport Bridge connects Jamestown with Newport, a city on Aquidneck Island

Rhode Island Route 138 is the only state highway in Jamestown, connecting the town and island to North Kingstown to the west (over the Jamestown Verrazzano Bridge) and Newport to the east (over the Newport Bridge).

Humans arrived in the area about 10,000 to 12,000 years ago, at the end of the last ice age, when they settled near streams and rivers. Ongoing melting of glaciers caused the sea level to rise, covering low-lying areas and eventually filling Narragansett Bay. The rising sea forced humans to higher elevations, and submerged most traces of the earliest inhabitants. The oldest human artifacts found on Conanicut Island date from around 3000 BC.

In 1524, the Italian navigator Giovanni da Verrazzano and his crew visited Narragansett Bay. In 1636 or 1637, "Dutch Island" was used by fur traders. In 1638 the English made arrangements to use Conanicut Island for grazing sheep.

The original Jamestown Bridge, which connected Jamestown with North Kingstown, Rhode Island from 1940 until its demolition in 2006

Ferries were in operation between Conanicut Island and Newport by 1675. In 1678, Conanicut Island was incorporated as the town of Jamestown. There were about 150 residents. The town was named for James, Duke of York, who would become King James II in 1685.

By 1710, many of Conanicut Island's current roads were in place. In 1728, the town of Jamestown built a windmill for grinding corn, which used the sea breeze for power since there was no source of running water to turn a waterwheel.

On December 10, 1775, 200 British and Hessian troops landed at East Ferry on Conanicut Island and marched to West Ferry, where they burned the ferry house. As they returned to East Ferry, they destroyed many buildings, including fourteen homes; which caused more than 200 of Conanicut Island's 556 residents to flee to the mainland.

In December 1776, a British fleet arrived in Narragansett Bay and occupied Newport. The British took over the colonial militia batteries at Fort Dumpling (now part of Fort Wetherill) and the Conanicut Battery at Beavertail (just south of Fort Getty, at the end of Battery Lane). The British left Narragansett Bay in October 1779. As they departed, they destroyed the fortifications they had occupied, and burned down the Beavertail Lighthouse.

By 1784, Beavertail Light was back in operation. In 1787, Jamestown rebuilt the Jamestown Windmill and Quaker Meetinghouse that had been destroyed during the occupation. 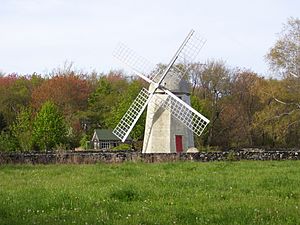 In 1800 Fort Dumpling was established on the site of previous fortifications overlooking East Passage. A tall stone tower atop the highest cliff could hold eight guns.

In 1872, the town of Jamestown commissioned a steam powered ferryboat. In May 1873, service was initiated between Jamestown and Newport. The availability of reliable and comfortable ferry service to and from Newport had a significant impact on agricultural Conanicut Island. Jamestown became a destination for both day trips and summer vacations.

The 1880s and 1890s saw a construction boom, with hotels, private summer homes and municipal buildings going up. The island's population tripled between 1870 and 1900.

Dawn of the 20th century to today

There was a burst of military fortification activity from 1890 to the end of World War I. The Spanish–American War, which began in 1898, was a catalyst. Work on Dutch Island's Fort Grebel began. The War Department bought 31 acres (130,000 m2) for Fort Getty and fortifications were quickly erected. Summer homes were condemned near Fort Dumpling to establish Fort Wetherill. More land was acquired at Prospect Hill, near the Conanicut Battery site, for an observation and fire control station. The Government established a torpedo station and test facility on Gould Island. Then, at the end of the First World War, the Conanicut Island fortifications fell into disuse.

Meanwhile, Jamestown was a bustling summer destination. In 1903, it had nine hotels. But the golden age of large resort hotels was brief in Jamestown and elsewhere. Patronage rapidly declined in the nineteen-twenties. The Thorndike Hotel was demolished in 1938.

In 1938 a major hurricane caused much property damage and the loss of more than 300 lives in the Narragansett Bay region. It swept much of the sand from the Mackerel Cove beach, destroyed its popular Beach Pavilion and speeded approvals for a bridge to Saunderstown by destroying the West Ferry docks. The first Jamestown Bridge opened in the summer of 1940, replacing West Ferry service with a continuously available link to the west.

In 1941 the Gardner House, one of the larger hotels, was taken down after being idle for several years. A USO building was built on its site. (After the war, the town purchased the building and it is now known as the Community Center. It was extensively landscaped and remodeled in 2002.)

World War II brought establishment or reactivation of military bases around Narragansett Bay, including Forts Getty, Burnside, and Wetherill on Conanicut Island, Fort Greble on Dutch Island, a torpedo factory on Goat Island and a torpedo station on Gould Island.

In 1969, the Newport (Pell) Bridge was completed, establishing Route 138 as a continuous highway from South County to Newport. With its completion, traditional ferry service was eliminated. (The bridge is celebrated on the Rhode Island commemorative quarters.)

Demolition of the original Jamestown Bridge in 2006

The Bay View Hotel, the last of the very large hotels, closed in the 1960s. The building was demolished in 1985. Four years later, the Bay View Condominiums opened for occupancy. The building exterior was carefully designed to closely resemble the hotel. The Bay Voyage Hotel, operating as a time share resort, is the only survivor of the many hotels that once lined Jamestown's eastern harbor.

The town's weekly newspaper, The Jamestown Press, was first published on April 21, 1989.

In 1992, the Jamestown-Verrazano Bridge replaced the narrow steel bridge erected in 1940. It was accompanied by construction of a new western-end access road and a cross-Conanicut Island highway.

According to the most recent Jamestown Rhode Island demographics data available from the United States Census Bureau released in the American Community Survey in December of 2019, Jamestown has a population of 5,496. There were 2,965 housing units of which 16.3% were rentals (including homes, apartments, etc.), for a housing density of 313.8 per square mile. Housing units decreased by −1.1% from 2010 to 2019.

Private preschool enrollment on Jamestown was 36% of the total school age population. Of the residents, 97% were high school graduates or better and 65% had a bachelor’s degree or higher. Those with a professional degree (e.g., law or medicine) made up 5.7% of the town population.

All of Rhode Island was part of a volcanic arc or micro-continent called Avalonia, which formed south of the equator more than 565 million years ago.

Avalonia drifted northward; eventually colliding with Proto North America about 400 million years ago. The impact contributed most of the land that has become the New England states and created most of the northern Appalachians.

During the past 75,000 years, Jamestown was visited by glaciers at least twice. They gouged out channels in the Narragansett Basin and left deposits of rocks and soil throughout the area. The last glaciers left the area about 12,000 years ago. Sea level was hundreds of feet lower than today; but as additional glaciers melted around the world, the sea rose, covering the continental shelf and eventually filling Narragansett Bay.

Portions of the films Wind, Me, Myself and Irene, American General, Evening, Dan in Real Life and Moonrise Kingdom were filmed in Jamestown, as well as in various nearby Aquidneck Island towns, such as Middletown and Newport. 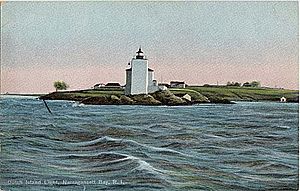 All content from Kiddle encyclopedia articles (including the article images and facts) can be freely used under Attribution-ShareAlike license, unless stated otherwise. Cite this article:
Jamestown, Rhode Island Facts for Kids. Kiddle Encyclopedia.