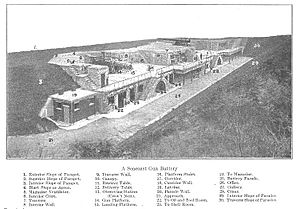 A US coast defense battery with two guns on disappearing carriages, similar to the 12-inch gun battery at Fort Getty. 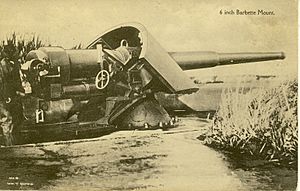 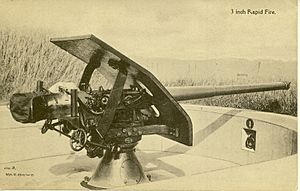 Fort Getty is a town park in Jamestown, Rhode Island, on Conanicut Island in Narragansett Bay. From 1900 through World War II it was a military fort. The Town of Jamestown later received the property and opened it as a park, primarily a campground.

Fort Getty went into caretaker status soon after completion, but was garrisoned in World War I as a sub-post of Fort Greble.

In 1948 the fort was disestablished, as were essentially all US coast defenses.

Dutch Island, the site of the former Fort Greble, lies near the fort and is a short boat ride from Fort Getty Park. The park also has facilities for RVs. As of 2015 there are 83 seasonal RV sites and 24 tent sites. The gun batteries have been partially buried but portions are still visible.

All content from Kiddle encyclopedia articles (including the article images and facts) can be freely used under Attribution-ShareAlike license, unless stated otherwise. Cite this article:
Fort Getty Facts for Kids. Kiddle Encyclopedia.