Prudence Island, shown in red, in the inner part of Narragansett Bay 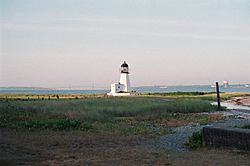 A more recent view of the Prudence Island Light, with the Mt. Hope Bridge in the background. 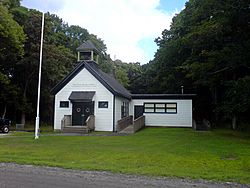 The Prudence Island Schoolhouse, built in 1896 (with indoor plumbing and a kitchen added to the side in 1951). On the corner of Broadway and Mt. Pleasant Ave.

Prudence Island is the third largest island in Narragansett Bay in the U.S. state of Rhode Island and part of the town of Portsmouth. It is located near the geographical center of the bay. It is defined by the United States Census Bureau as Block Group 3, Census Tract 401.03 of Newport County, Rhode Island. As of the 2000 census the population was 88 people living on a land area of 14.43 km² (5.57 sq mi).

The Narragansett name for the island was "Chibachuweset" (or "Chibachuwese"), and the Narragansetts originally offered it for sale to John Oldham if he would settle there and set up a trading post. Oldham failed to meet the condition, so they sold the island to Roger Williams and John Winthrop in 1637, with each man retaining a one-half interest. Williams took the northern side of the island and Winthrop took the southern side. Division wall divides the two sides, and Pulpit Rock can still be found today on the northern side of the island.

Williams and Winthrop hoped to farm pigs on the island. Williams named it "Prudence" and shortly afterwards purchased and named nearby Patience Island and Hope Island. Williams sold his half interest in Prudence Island while in England on behalf of the colony, and Winthrop willed his land to his son Stephen.

In colonial times, the island was used mainly for farming. During the American Revolution, the British forces under Captain James Wallace raided Prudence Island for livestock and engaged in a skirmish with American forces, losing approximately a dozen soldiers. In the 20th century, farming began to decline and the island began to attract summer residences. In World War II, the U.S. Navy established an ammunition depot on the southernmost 400 acres (1.6 km2) of the island. In 1972, the Navy turned the base over to the state of Rhode Island, leaving bunkers, roads, and a large deep-water pier.

The former Naval Base is now home to the Narragansett Bay National Estuarine Research Reserve, as well as the former Garland Estate on the northernmost part of the island. The Farnham Farm is a national historic site. The island is served by ferry service to Bristol, Rhode Island. Parts of the 2012 film Moonrise Kingdom were filmed on the island and nearby Jamestown, Rhode Island.

There are several different summer colonies on the island, named after either their plat names or by the original owner of the land / subdivision. These are in order from the south:

All content from Kiddle encyclopedia articles (including the article images and facts) can be freely used under Attribution-ShareAlike license, unless stated otherwise. Cite this article:
Prudence Island Facts for Kids. Kiddle Encyclopedia.