Oak Bluffs is a town located on the island of Martha's Vineyard in Dukes County, Massachusetts, United States. The population was 5,341 at the 2020 United States Census. It is one of the island's principal points of arrival for summer tourists, and is noted for its "gingerbread cottages" and other well-preserved mid- to late-nineteenth-century buildings. The town has been a historically important center of African American culture since the eighteenth century.

The first inhabitants of Oak Bluffs were the Wampanoag people, who have lived on Martha's Vineyard (Wampanoag name: Noepe) for approximately 10,000 years. The area that is now Oak Bluffs was called "Ogkeshkuppe," which means "damp/wet thicket or woods."

The area was later settled by Europeans in 1642 and was part of Edgartown until 1880, when it was officially incorporated as Cottage City. The town re-incorporated in 1907 as Oak Bluffs, named because the town was the site of an oak grove along the bluffs overlooking Nantucket Sound. Oak Bluffs was the only one of the six towns on the island to be consciously planned, and the only one developed specifically with tourism in mind.

The New England cottages of Martha’s Vineyard have been a summer getaway for the African-American elite for more than 100 years. Drawn to the harbors of Oak Bluffs in the late 1800s, freed slaves and laborers began settling there.

In 1866 Robert Morris Copeland was hired by a group of New England developers to design a planned residential community in Martha's Vineyard. The site, a large, rolling, treeless pasture overlooking Vineyard Sound, was adjacent to the immensely popular Methodist camp meeting, Wesleyan Grove, a curving network of narrow streets lined with quaint "Carpenter's Gothic" cottages, picket fences, and pocket parks. Seeking to take advantage of the camp’s seasonal popularity (and overflowing population), the developers established Oak Bluffs Land and Wharf Company, gaining immediate success: Five hundred lots were sold between 1868 and 1871. Copeland would end up creating three plans for the community to accommodate its constant expansion. Oak Bluffs is the one of the earliest planned residential communities and largely informed later suburban development in the United States.

Some of the earliest visitors to the area that became Cottage City and later Oak Bluffs were Methodists, who gathered in the oak grove each summer for multi-day religious "camp meetings" held under large tents and in the open air. As families returned to the grove year after year, tents pitched on the ground gave way to tents pitched on wooden platforms and eventually to small wooden cottages. Small in scale and closely packed, the cottages grew more elaborate over time. Porches, balconies, elaborate door and window frames became common, as did complex wooden scrollwork affixed to the roof edges as decorative trim. The unique "Carpenter's Gothic" architectural style of the cottages was often accented by the owner's use of bright, multi-hue paint schemes, and gave the summer cottages a quaint, almost storybook look. Dubbed "gingerbread cottages," they became a tourist attraction in their own right in the late nineteenth century. So, too, did the Tabernacle: a circular, open-sided pavilion covered by a metal roof supported by tall wrought iron columns, erected in the late 1880s, which became a venue for services and community events. The campground's gingerbread cottages are cherished historic landmarks as well as very expensive real estate. Many are still family owned and passed on generation to generation. On April 5, 2005, the grounds and buildings in the Campground were designated a National Historic Landmark by the Secretary of the Interior.

Nineteenth-century tourists, arriving by steamer from the mainland, could also choose from a wide range of secular attractions: shops, restaurants, ice cream parlors, dance halls, band concerts, walks along seaside promenades, or swims in the waters of Nantucket Sound. Resort hotels, of which the Wesley House is the sole surviving example, lined the waterfront and the bluffs. For a time, a narrow-gauge railway carried curious travelers from the steamship wharf in Oak Bluffs to Edgartown, running along tracks laid on what is now Joseph Sylvia State Beach. In 1884, the Flying Horses Carousel was brought to Oak Bluffs from Coney Island and installed a few blocks inland from the ocean, where it remains in operation today. Built in 1876, it is the oldest platform carousel still in operation. Like the grounds and buildings of the Campground (so designated in April 2005), the Flying Horses were designated a National Historic Landmark by the Secretary of the Interior.

In 1873 the neighboring community of Harthaven was established by William H. Hart when he purchased a lot from the Oak Bluffs Land and Wharf Company. The community later moved in 1911 to its present location between Oak Bluffs town and Edgartown.

The "Grand Illumination" is a yearly event, usually held in August, the date of which is not always publicly disclosed. For the 2012 summer events, there was an open Cottage Tour, of the National Historical Registered homes, on Wednesday, August 8, and Grand Illumination Night on Wednesday, August 15. Martha's Vineyard, Oak Bluffs and the Campground events attract many tourists. For one special night, residents of the Campground place ornate Chinese lanterns (some electric, some still lit with just a candle), around each Gingerbread Cottage. The lanterns remain dark until after dusk. At an appointed hour, people gather in the Tabernacle for a sing-along and community gathering. At the end all the lights go out and thousands of Chinese lanterns spring to life in a brilliant cascade of light throughout the campground. The celebration ends after visitors walk through the Campground enjoying the sights and sounds of an event taken straight from the start of the 20th century.

According to the United States Census Bureau, the town has a total area of 26.0 square miles (67 km2), of which, 7.4 square miles (19 km2) of it is land and 18.6 square miles (48 km2) of it (71.61%) is water. In terms of land area, the town is 323rd out of 351 communities in the Commonwealth, and the third smallest community (behind Aquinnah and Tisbury) in Dukes County. Oak Bluffs is bordered by Nantucket Sound to the north and east, Edgartown to the south, and Vineyard Haven Harbor, Lagoon Pond and Tisbury to the west. It also shares a common corner, along with Tisbury and Edgartown, with West Tisbury.

The northernmost point of the town, East Chop, is just over five miles from the mainland. The town shares Sengekontacket Pond with Edgartown, with the town's land ending at Sarson's Island, but wrapping around the waters around Felix Neck into Major's Cove. The highest points in town are between Sengekontacket and Lagoon Ponds, and west of Lagoon Pond in the irregular triangle of land which juts into Tisbury. 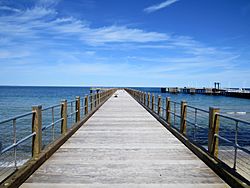 There are four public beaches in the town: Eastville Beach, facing Vineyard Haven Harbor and adjacent to the entrance to Lagoon Pond; Oak Bluffs Town Beach or The” Inkwell” is the name of the popular beach frequented by African Americans beginning in the late nineteenth century. The strand was pejoratively called “The Inkwell” by nearby whites in reference to the skin color of the beach-goers. It is the most famous of beaches across the U.S. to transform this odious nickname into an emblem of pride, bordering Nantucket Sound just south of the Steamship Authority Pier; Hart Haven Beach, further to the south; and Joseph Sylvia State Beach, a barrier beach (shared by Oak Bluffs and Edgartown) that separates Sengekontacket Pond from Nantucket Sound. State Beach is punctuated by two inlets that connect the pond to the ocean. The smaller of the two is spanned by the Veterans of Foreign Wars Bridge, which lies wholly within Oak Bluffs, and the larger by the American Legion Bridge, the midpoint of which is the boundary between Oak Bluffs and Edgartown. The formal names of the bridges are generally ignored by residents in favor of the traditional designations "Little Bridge" and "Big Bridge."

Oak Bluffs has a small, tightly enclosed harbor that draws large numbers of recreational boaters, and serves as a year-round home port to a small number of fishing boats. Seasonal passenger ferries to Falmouth, Hyannis, and Nantucket dock along the east side of the harbor, as does a high-speed ferry to Quonset Point, RI. The seasonal car-and-truck-ferry service operated by the Woods Hole, Martha's Vineyard and Nantucket Steamship Authority docks outside the harbor, at a long pier projecting into Nantucket Sound, as does the fast ferry that provides seasonal service to New Bedford. The exposed nature of the pier means that Steamship Authority ferries are routinely diverted to Vineyard Haven during strong northeasterly winds. Oak Bluffs is also the site of Trade Winds Airport, a private grass landing strip located just north of Sengekontacket Pond.

Like other towns in Southeastern Massachusetts, Oak Bluffs has had a large Portuguese-American population since the late 19th century. Many of these town residents were originally from the island of Faial in the Azores, and the neighborhood where many of them lived, located between Vineyard Avenue and Wing Rd, was once nicknamed Fayal. Today the town's Portuguese heritage is best appreciated at the Annual Portuguese Feast, held at the Portuguese-American Club on Vineyard Avenue in mid-July.

All content from Kiddle encyclopedia articles (including the article images and facts) can be freely used under Attribution-ShareAlike license, unless stated otherwise. Cite this article:
Oak Bluffs, Massachusetts Facts for Kids. Kiddle Encyclopedia.