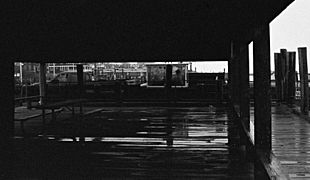 The "Chappy Ferry", the landing near Edgartown village for the ferry that crosses to Chappaquiddick Island

In 1642, Rev. Thomas Mayhew, Jr. led a group of families to start a colony on the island after its purchase by his father Thomas Mayhew. Originally called Great Harbor, it was incorporated in 1671 as Edgar Towne, and is the first of the two original towns on Martha's Vineyard, along with Tisbury. The town's current name is in honor of Edgar, the son of James II of England who died at the age of three in 1671.

The younger Mayhew began his work which led to his becoming the first church planting Protestant missionary after he settled in Edgartown. A Wampanoag Indian named Hiacoomes who lived nearby became his partner in founding the churches in the Indian communities.

Edgartown is well known as having been one of the primary ports for the whaling industry during the 1800s. Ships from all over the world would dock in its sheltered bay and captains would build grand mansions for their families with ornate top floor rooms called widow's walks, which overlooked the harbor. A myth developed that wives would watch for months from these tiny rooms, hoping to see the sails of ships that would bring their husbands home from the sea. There is little or no evidence that widow's walks were intended or regularly used for this purpose. They were frequently built around the chimney of the residence, thus creating an easy access route to the structure, allowing the residents of the home to pour sand down burning chimneys in the event of a chimney fire in the hopes of preventing the house from burning down.

As more economical alternatives became available the whaling industry began to decline. By the beginning of the 20th century, its influence on the tiny town which had made its fortunes through the industry, was ended. Today the town is more known for tourism, as well as the site of Chappaquiddick, where Ted Kennedy's infamous incident took place in 1969. 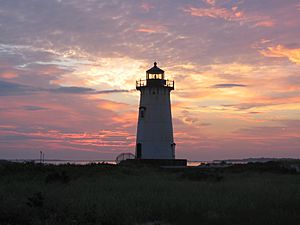 View of Edgartown Lighthouse on Martha's Vineyard at dawn. This is one of 5 lighthouses on the island. It is located at the opening of Edgartown harbor. It can be viewed by walking north on North Water street to an area adjacent to the Harborview Inn. 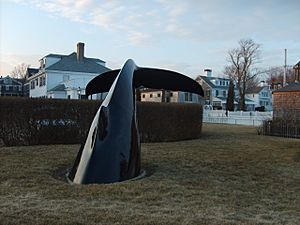 Photo of the Whale Tail Sculpture in downtown Edgartown

Edgartown was an old whaling port and is now a summer and tourist destination with a multitude of houses built by whaling captains and other prominent people of prior centuries. The growth of the population over the past 25 years has led to a period of intense renewal of these old houses. Water Street along the harbor is the location of many of these "Captain's Homes" which line both sides of the street. The town has also encouraged renovation of historical structures. As part of this effort, the Whaling Church, a large 18th century church, has been converted to a performing arts center and the adjacent Daniel Fisher House is now used for a variety of social functions. In addition to the architecture of the town, Edgartown is easily traversed on foot or bicycle, making it attractive to tourists.

Edgartown was used as the main shooting location for the town of Amity in Steven Spielberg's 1975 blockbuster Jaws. Many landmarks and buildings in Edgartown that were filmed in the movie can still be seen today.

The Edgartown Harbor Light at the end of north Water Street defines the entrance to the Harbor. The harbor is large and entered through a modest sized channel on the North side of Edgartown. It opens into Katama Bay, created by a barrier beach that sometimes connects the south end of Chappaquiddick to the remainder of Edgartown, The barrier beach opened during a spring storm in 2007. This has led to a 3 knot current through Katama Bay and Edgartown Harbor. This protected body of water provides ample mooring for small and large boats. The opening of the harbor will accommodate large sailing and motorized boats, but will not accommodate large ships or yachts which may anchor outside the harbor.

Another feature is South Beach, a small part of the ocean beach that runs the entire southern length of the island from Edgartown to Aquinnah. It can be reached by driving or riding the bus south from Edgartown center for approximately 2.5 miles. South Beach is a crashing ocean beach. It is a major destination for tourists. Much of the beach in Edgartown is open to the public with ample parking available. The section of the beach near Katama is often crowded, while the sections further to the west (near Edgartown Great Pond and Oyster Pond) are often less so.

According to the United States Census Bureau, the town has a total area of 122.7 square miles (318 km2), of which 27.0 square miles (70 km2) is land and 95.8 square miles (248 km2) (78.01%) is water. Edgartown is ranked 103rd out of 351 communities in the Commonwealth by land area, and is the largest town by land area in Dukes County. Edgartown is bordered by Nantucket Sound to the northeast and east, the Atlantic Ocean to the south, West Tisbury to the west, and Oak Bluffs to the north. The town also shares a common corner with Tisbury (along with West Tisbury and Oak Bluffs). 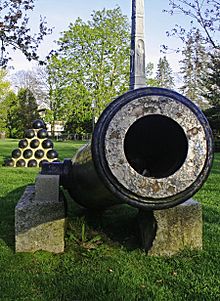 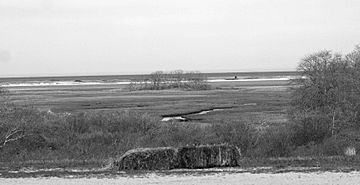 Edgartown is located at the eastern end of Martha's Vineyard (referred to as "down-island", a vestige of the island's traditional maritime manner of speaking in that as a ship travels east, it is said to be traveling "down east" as longitude decreases towards the Prime Meridian). [An alternative explanation and one prevalent in Maine, is that down east is down wind in the prevailing winds of the New England coast, down island would also be down wind. For those who have spent a lot of time sailing (as opposed to 'power boating'), down wind is more important to a sailor than decreasing longitude.]

The town of Edgartown includes the smaller island of Chappaquiddick, sometimes connected to the rest of Martha'a Vineyard only by a barrier beach which can be breached during storms. Chappaquiddick is separated from the town center by Edgartown Harbor and Katama Bay. The town is close to Nantucket's Muskeget Island, which is seven miles east of Wasque Point, the southeasternmost point of Chappaquiddick.

Katama is the south-central portion of Edgartown. In addition to a beach, Katama has within its boundaries the Katama Airpark, the Katama Farm, the Herring Creek Farm and two resorts. Edgartown is also home to half of the Manuel F. Correllus State Forest, which extends into neighboring West Tisbury. There are nine beaches, a yacht club, and several preserves and reservations in the town, including the Wasque Reservation along the south shore of Chappaquiddick and the Cape Pogue Wildlife Refuge along the east shore of the island. There are two lighthouses in the town, the Cape Pogue Light on Chappaquiddick and the Edgartown Harbor Light in Edgartown Harbor. 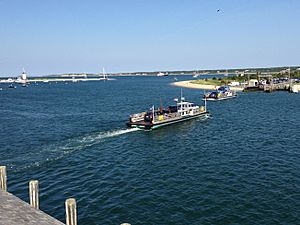 View of the ferries "On Time II" and "On Time III" crossing between Edgartown and Chappaquiddick Island; the Edgartown Harbor Light can be seen in the far distance on the left.

Auto transportation to Chappaquidick is provided by two ferries, the "On Time II" and "On Time III". A common myth is that the original ferry "On Time" was given its name because the ferry has never had scheduled runs and thus is never late. In fact, the ferry was given this name because a new owner, Foster B. Silva of Chappaquiddick, had less than two weeks to build it before taking over the service on August 1, 1948. The work crew—led by Captain Samuel B. Norton and master boatbuilder Manuel Swartz Roberts, both of Edgartown—built and launched the new ferry "on time." This original "On Time" was converted to a barge dispensing fresh water to visiting yachtsmen after its service as a ferry ended in 1975. The barge was sold and lost track of in the late 1990s. The "On Time II," built in 1969, and the "On Time III," built in 1975 and now owned by Peter. S. Wells and his wife Sally T. Snipes of Chappaquiddick, are still in service.

In addition to the On Time Ferry, Edgartown is home to another ferry, the Pied Piper, which runs seasonally between the town and Falmouth, on Cape Cod. There are two airports in the town. Katama Airpark is a grass field and located between Katama Bay and Edgartown Great Pond in the southern part of town; it serves smaller private aircraft. Along the border of the state forest lies Martha's Vineyard Airport, which Edgartown shares with West Tisbury. This airport is used for commercial commuter flights from nearby sites on the mainland and Nantucket.

There were 1,582 households out of which 28.3% had children under the age of 18 living with them, 47.7% were married couples living together, 8.6% had a female householder with no husband present, and 39.5% were non-families. 30.1% of all households were made up of individuals and 10.3% had someone living alone who was 65 years of age or older. The average household size was 2.35 and the average family size was 2.92.

In 2003 the Martha's Vineyard Gazette estimated that there were 15,000 year-round inhabitants of the island with a summer increase to 105,000. Over the last 20 years there has been a continuous growth in the population of the island, although many of the large expanses of undeveloped land and many vistas remain. The summer season, which previously lasted from mid-June through Labor Day weekend has been gradually extended and now includes the period from Memorial Day through Columbus Day.

All content from Kiddle encyclopedia articles (including the article images and facts) can be freely used under Attribution-ShareAlike license, unless stated otherwise. Cite this article:
Edgartown, Massachusetts Facts for Kids. Kiddle Encyclopedia.