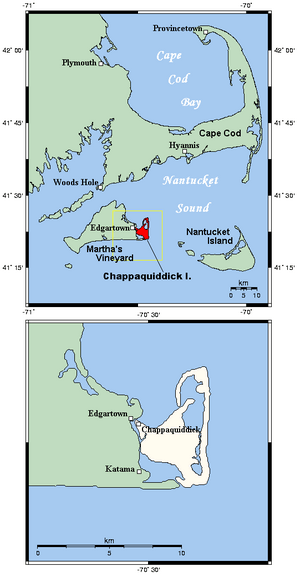 Chappaquiddick is connected to Martha's Vineyard with the southern barrier beach between Katama and Wasque. 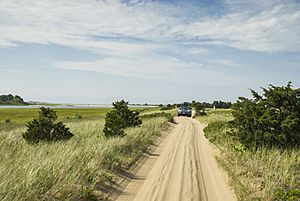 Chappaquiddick Island (Wampanoag: Noepetchepi-aquidenet; colloquially known as "Chappy"), a part of the town of Edgartown, Massachusetts, is a small peninsula and occasional island on the eastern end of Martha's Vineyard. Norton Point, a narrow barrier beach, connects Martha's Vineyard and Chappaquiddick between Katama and Wasque (pronounced way-sqwee). Occasional breaches occur due to hurricanes and strong storms separating the islands for periods of time. Most recently, the two were separated for 8 years from 2007 to 2015. Though both land forms have, over the course of history, mostly been connected to one another, Chappaquiddick is nevertheless referred to as an island.

Visitors come to the isolated island for beaches, cycling, hiking, nature tours and birding, and the MyToi Gardens, a small Japanese garden created amidst the native brush. Chappaquiddick has one business, the Chappy Store, occasionally open during the summer months to serve basic needs. Two fire trucks are stationed on the island from Edgartown. Chappaquiddick Road and Pocha Road, both paved, provide access to sandy, woodland roads, trails, and shorelines.

The name Chappaquiddick comes from an Indian word "cheppiaquidne" meaning "separated island", so named because this island is separated from Martha's Vineyard by a narrow strait or gut. The island has been historically spelled as "Chaubaqueduck" or, alternatively, "Chappaquidgick".

The island was once mainly the home territory of the Chappaquiddick band of Wampanoag Indians, remaining exclusively theirs well into the nineteenth century. They still have a reservation of about 100 acres (40 ha) (40 hectares) of brush land in the interior.

Early white colonists settled Edgartown in 1642, quickly proclaiming Chappaquiddick as village property as well. The first homes owned by people of exclusively European descent were built around 1750 where residents raised livestock and farmed the land. 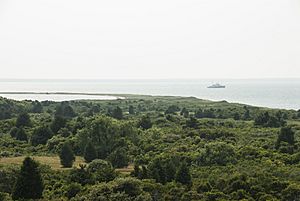 The Trustees of Reservations, a non-profit conservation organization, owns and manages nearly 1,000 acres (405 ha) of land from the southeastern point, Wasque, to Cape Poge, at the northeast. Wasque is a popular fishing spot for catching bluefish, striped bass, and other species. The Cape Poge Lighthouse, first erected in 1801, has served ships navigating the shoalwaters and shallows of Muskeget Channel.

While the island has continually faced shifting coastlines due to ocean currents, storm surges, and astronomical tides, the 21st century has presented new erosion challenges, particularly to Wasque Point which, during the Patriots' Day Storm of 2007, was battered severely. Between 2007 and 2013, approximately 40 acres (16 ha) of land were lost at Wasque, where currents eroded bluffs, swallowed Swan Pond, damaged shoreline trails, and threatened a residence. 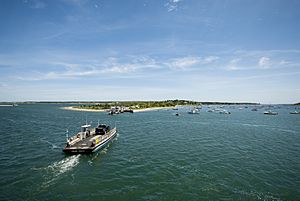 The On Time II (foreground), shuttling passengers between mainland Martha's Vineyard and Chappaquiddick.

Access to the island is served by privately owned barge-like ferries named the On Time II and On Time III which shuttle pedestrians, bicycles, and up to three cars at a time between Chappaquiddick and Edgartown, on Martha's Vineyard. Two ferries run during the summer months and one during the off-season. Oversand access is possible with four-wheel drive vehicles on the south shore when the islands are connected and conditions permit.

Events at Chappaquiddick Island gained international attention on July 19, 1969, when the body of Mary Jo Kopechne was discovered inside an overturned car in a channel on the island. The car belonged to U.S. Senator Ted Kennedy, who had accidentally driven it off a bridge late on the previous night, and did not report the incident to the police until the next day. Kopechne's body was finally recovered from the submerged car by divers, and Kennedy entered a plea of guilty to a charge of "leaving the scene of a crash after causing injury".

All content from Kiddle encyclopedia articles (including the article images and facts) can be freely used under Attribution-ShareAlike license, unless stated otherwise. Cite this article:
Chappaquiddick Island Facts for Kids. Kiddle Encyclopedia.