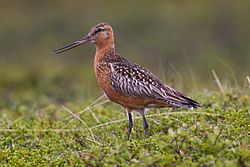 Sandpipers are a large family of waders or shorebirds, the Scolopacidae. They include many species called sandpipers, as well as those called by names such as curlew and snipe. Most species eat small invertebrates picked out of the mud or soil. Different lengths of bills allow different species to feed in the same habitat on the coast without direct competition for food.

Sandpipers have long bodies and legs, and narrow wings. Most species have a narrow bill, but otherwise the form and length are quite variable. They are small to medium sized birds, measuring 12 to 66 cm (4.7–26.0 in) cm in length. The bills are sensitive, allowing the birds to feel the mud and sand as they probe for food. They generally have dull plumage, with cryptic brown, grey, or streaked patterns, although some display brighter colours during the breeding season.

Most species nest in open areas, and defend their territories with aerial displays.

There are broadly four feeding styles employed by the sandpipers, although many species are flexible and may use more than one style. The first is pecking with occasional probing, usually done by species in drier habitats that do not have soft soils or mud. The second, and most frequent, method employed is probing soft soils, muds and sands for prey. The third, used by Tringa shanks, involves running in shallow water with the bill under the water chasing fish, a method that uses sight as well as tactile senses. The final method, employed by the phalaropes and some Calidris sandpipers, involves pecking at the water for small prey. A few species of scolopacids are omnivorous to some extent, taking seeds and shoots as well as invertebrates.

Sandpipers lay three or four eggs into the nest, which is usually a vague depression or scrap in the open ground, scarcely lined with soft vegetation.

In species where both parents incubate the eggs, females and males share their incubation duties in various ways both within and between species. In some pairs, parents exchange on the nest in the morning and in the evening so that their incubation rhythm follows 24-hour day, in others each sex may sit on the nest continuously for up to 24 hours before it is exchanged by its partner. In species where only single parent incubates the eggs, during the night the parent sits on the eggs nearly continuously and then during the warmest part of a day leaves the nest for short feeding bouts.

Chicks hatch after about three weeks of incubation and are able to walk and forage within few hour of hatching. Single parent or both parents guide and brood the chicks.

All content from Kiddle encyclopedia articles (including the article images and facts) can be freely used under Attribution-ShareAlike license, unless stated otherwise. Cite this article:
Sandpiper Facts for Kids. Kiddle Encyclopedia.