The least sandpiper (Calidris minutilla) is the smallest shorebird. The genus name is from Ancient Greek kalidris or skalidris, a term used by Aristotle for some grey-colored waterside birds. The specific minutilla is Medieval Latin for "very small". 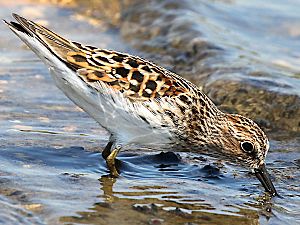 This species has greenish legs and a short, thin, dark bill. Breeding adults are brown with dark brown streaks on top and white underneath. They have a light line above the eye and a dark crown. In winter, Least sandpipers are grey above. The juveniles are brightly patterned above with rufous coloration and white mantle stripes.

This bird can be difficult to distinguish from other similar tiny shorebirds; these are known collectively as "peeps" or "stints". In particular, least sandpiper is very similar to its Asian counterpart, long-toed stint. It differs from that species in its more compact, shorter-necked appearance, shorter toes, somewhat duller colors, and stronger wingbar.

Their breeding habitat is the northern North American continent on tundra or in bogs. They nest on the ground near water. The female lays four eggs in a shallow scrape lined with grass and moss. Both parents incubate; the female leaves before the young birds fledge and sometimes before the eggs hatch. The young birds feed themselves and are able to fly within two weeks of birth.

They migrate in flocks to the southern United States, Mexico, Central America, the Caribbean, and northern South America. They occur as very rare vagrants in western Europe.

These birds forage on mudflats, picking up food by sight, sometimes by probing. They mainly eat small crustaceans, insects, and snails.

All content from Kiddle encyclopedia articles (including the article images and facts) can be freely used under Attribution-ShareAlike license, unless stated otherwise. Cite this article:
Least sandpiper Facts for Kids. Kiddle Encyclopedia.