A flock landing in Tasmania, Australia. Note the barring on the tail

The bar-tailed godwit (Limosa lapponica) is a water bird. It is a large wader in the family Scolopacidae. It breeds on Arctic coasts and tundra mainly in the Old World, and winters on coasts in temperate and tropical regions of the Old World.

Its migration is the longest known non-stop flight of any bird and also the longest journey without pausing to feed by any animal. 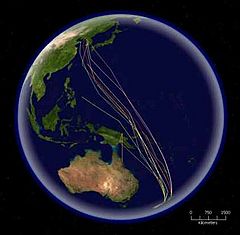 The bar-tailed godwit migrates in flocks to coasts in East Asia, Alaska, Australia, Africa, northwestern Europe and New Zealand, where the sub-species Limosa lapponica baueri is called Kūaka in Māori.

In 2007 birds in New Zealand were tagged and tracked by satellite to the Yellow Sea in China. According to Clive Minton (Australasian Wader Studies Group) "The distance between these two places is 9,575 kilometres (5,950 mi), but the actual track flown by the bird was 11,026 kilometres (6,851 mi)". The flight took about nine days.This is the longest known non-stop flight of any bird. At least three other bar-tailed godwits reached the Yellow Sea after non-stop flights from New Zealand.

One female in the flock, nicknamed "E7", flew onward from China to Alaska and stayed there for the breeding season. Then on 29 August 2007 she departed on a non-stop flight from the Avinof Peninsula in western Alaska to the Piako River near Thames New Zealand, setting a new known flight record of 11,680 kilometres (7,258 mi).

All content from Kiddle encyclopedia articles (including the article images and facts) can be freely used under Attribution-ShareAlike license, unless stated otherwise. Cite this article:
Bar-tailed godwit Facts for Kids. Kiddle Encyclopedia.