A snipe is any of about 26 wading bird species in three genera in the family Scolopacidae. They are characterized by a very long, slender bill, eye placed high on the head, and crypsis, or camouflage, plumage. The Gallinago snipes have a nearly worldwide distribution, the Lymnocryptes snipe is restricted to Asia and Europe and the Coenocorypha snipes are found only in the outlying islands of New Zealand. The four species of painted snipe are not closely related to the typical snipes, and are placed in their own family, the Rostratulidae.

Snipes search for invertebrates in the mud with a "sewing-machine" action of their long bills. The sensitivity of the bill is caused by filaments belonging to the fifth pair of nerves, which run almost to the tip and open immediately under the soft cuticle in a series of cells; a like adaptation is found in sandpipers; they give this portion of the surface of the premaxillaries a honeycomb-like appearance: with these filaments the bird can sense its food in the mud without seeing it.

Snipes feed mainly on insect larva. Other invertebrate prey include snails, crustacea, and worms. The snipe's bill allows the very tip to remain closed while the snipe slurps up invertebrates.

Snipes can be found in various types of wet marshy settings including bogs, swamps, wet meadows, and along rivers, coast lines, and ponds. Snipes avoid settling in areas with dense vegetation, but rather seek marshy areas with patchy cover to hide from predators. 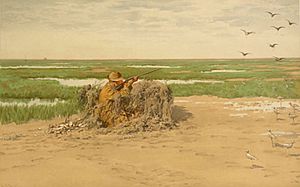 Depiction of a snipe hunter, by A. B. Frost

Camouflage may enable snipe to remain undetected by hunters in marshland. If the snipe flies, hunters have difficulty wing-shooting due to the bird's erratic flight pattern. The difficulties involved in hunting snipes gave rise to the term sniper, meaning a hunter highly skilled in marksmanship and camouflaging, which later evolved to mean a sharpshooter or someone who shoots from a concealed location.

"Going on a snipe hunt" is a phrase suggesting a fool's errand, or an impossible task. As an American rite of passage, it is often associated with summer camps and groups such as the Boy Scouts.

All content from Kiddle encyclopedia articles (including the article images and facts) can be freely used under Attribution-ShareAlike license, unless stated otherwise. Cite this article:
Snipe Facts for Kids. Kiddle Encyclopedia.