The bristle-thighed curlew (Numenius tahitiensis) is a medium-sized shorebird that breeds in Alaska and winters on tropical Pacific islands. It has a long, decurved bill and bristled feathers at the base of the legs. Its length is about 40–44 cm and wingspan about 84 cm (females averaging bigger than males). The size and shape are the same as the whimbrel's, and the plumage is similar, spotted brown on their upper body with a light belly and rust-colored or buffy tail. The bigger buff spots on the upper body, unmarked light belly and barely marked flanks, tail color, and pale buffy-orange rump distinguish it from the whimbrel.

The population is estimated at 7,000. 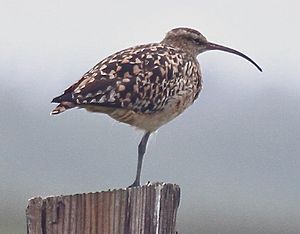 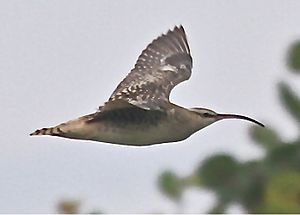 Bristle-thighed curlews feed on a wide variety of vegetation such as flowers and berries and on insects, sea life, and other bird's eggs, which they break open with rocks — the only tool use among shorebirds.

The bird is rarely seen near populated land masses, with only a handful of sightings in Canada, California and Oregon. It was first described scientifically during James Cook's visits to Tahiti in the 18th century, but its nesting grounds were not identified until 1948.

Nesting grounds are on the lower Yukon River and Seward Peninsula, with the birds preferring low-lying tundra near the shoreline. Nests are built in ground depressions and lined with tundra moss. Eggs are greenish with brown spots, with four to a clutch and one brood per season. Incubation lasts 25 days, with both parents tending the nest and protecting the newly hatched chicks.

Adults leave their chicks at about five weeks of age to migrate south. The chicks continue to feed until they are able to make the journey. The first leg of the migration includes a nonstop 4,000 km flight from Alaska to Laysan. They can make non-stop flights in excess of 6,000 km.

Bristle-thighed curlews are unique among shorebirds in that they are flightless during molt. Also, their migration departures consist of small flocks and have no diurnal patterns.

Its winter habitat is tropical Oceania, and includes Micronesia, Fiji, Tuvalu, Tonga, Hawaiian Islands, Samoa, French Polynesia and Tongareva (Penrhyn atoll). There is concern over encroachment and introduced predators in their winter habitat.

All content from Kiddle encyclopedia articles (including the article images and facts) can be freely used under Attribution-ShareAlike license, unless stated otherwise. Cite this article:
Bristle-thighed curlew Facts for Kids. Kiddle Encyclopedia.