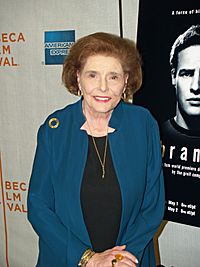 Neal was born on January 20, 1926 in Packard, Kentucky. She was raised in Knoxville, Tennessee. She studied at Knoxville High School and at Northwestern University. Neal was married to Roald Dahl from 1953 until they divorced in 1983. They had five children. She was partners with Gary Cooper before she meet Dahl. Neal died on August 8, 2010 in Edgartown, Massachusetts from lung cancer, aged 84.

All content from Kiddle encyclopedia articles (including the article images and facts) can be freely used under Attribution-ShareAlike license, unless stated otherwise. Cite this article:
Patricia Neal Facts for Kids. Kiddle Encyclopedia.