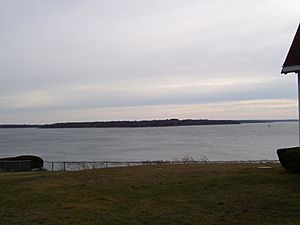 Patience Island from near Warwick Light 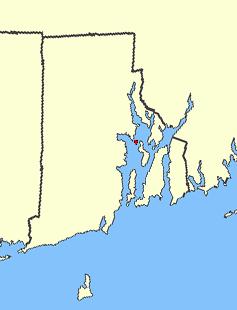 Patience Island, shown in red, in the inner part of Narragansett Bay

Patience Island lies off the northwest coast of Prudence Island in the town of Portsmouth, Rhode Island. It has a land area of 0.33 sq mi (0.85 km2; 210 acres), making it the fourth-largest island in Narragansett Bay. Aside from a single 600-square foot house, which is disconnected from the state electrical grid, Patience Island is otherwise uninhabited.

The island and others nearby were named by Roger Williams and other early colonists. Colonial school children often recited the poem: "Patience, Prudence, Hope and Despair. And the little Hog over there." The last residents were the Steere Family, Earle and Clark Steere Founder's of the Warwick Cove Marina and descendants of Arthur Steere, Senator and best friend of Roger Williams. Patience Island was a gift from the local Indians to Roger Williams and Steere to promote early colonization of Rhode Island. [1] Patience Island became part of Portsmouth in 1664.

All content from Kiddle encyclopedia articles (including the article images and facts) can be freely used under Attribution-ShareAlike license, unless stated otherwise. Cite this article:
Patience Island Facts for Kids. Kiddle Encyclopedia.