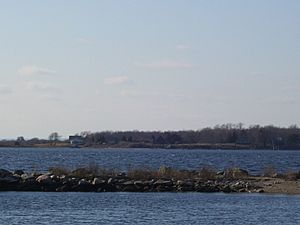 Hog Island in the distance, seen from near the Bristol Ferry Light 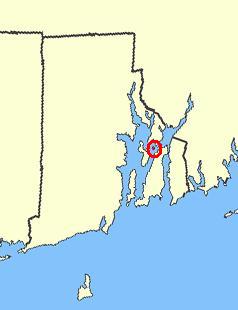 Hog Island, circled in red, in the inner part of Narragansett Bay

Hog Island is an island in Narragansett Bay in Rhode Island, United States. It lies at the entrance to the harbor of the town of Bristol, and is part of the town of Portsmouth. The 60-foot (18.3 m) tall Hog Island Shoal Lighthouse stands off the south end, warning ships to beware of the dangerous shoals around the island. The island is home to a small summer vacation colony with no regular year-round residents and has a land area of 0.797 km² (196.97 acres), making it the fifth-largest island in Narragansett Bay.

There are approximately 100 homes on the island at this time.

All content from Kiddle encyclopedia articles (including the article images and facts) can be freely used under Attribution-ShareAlike license, unless stated otherwise. Cite this article:
Hog Island (Rhode Island) Facts for Kids. Kiddle Encyclopedia.