"The Point" from the Goat Island causeway bridge 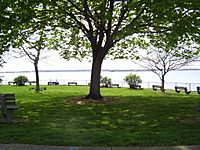 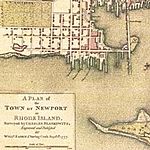 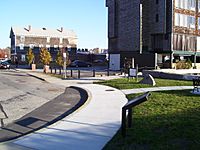 Gravelly Point off of Long Wharf, was the site of the largest public mass execution in American history, when 26 pirates were executed. They were then buried on Goat Island.

The Point (or less commonly, "Easton's Point") is one of the oldest neighborhoods in Newport, Rhode Island and has one of the highest concentrations of colonial houses in the United States. The neighborhood sits between Washington Street and Farewell Street/America's Cup in Newport looking out on Goat Island, former home to the U.S. Naval Torpedo Station.

Nicholas Easton, a founder of Newport, first settled in the area in the 17th century. Easton's heirs divided the property into lots in 1725 and sold parcels to many of Newport's early tradesmen and merchants. Many of the early inhabitants attended the nearby Quaker Meeting House or Touro Synagogue. None of the streets were originally named after people because of a Quaker tradition, so 1st (now Washington), 2nd, and 3rd Streets were intersected by streets with tree names (Elm, Poplar, Willow, Walnut, Chestnut, Cherry, Pine, Sycamore, and Cypress). Marsh Street was formerly the site of a marsh, and Bridge Street was the site of a bridge traversing the north side of the marsh. Long Wharf jutted across the south side of the marsh until it was filled in the 19th century.

In 1723, Gravelly Point (off of Long Wharf) was the site of the largest public mass execution in American history, when 26 pirates were executed. They were then buried on nearby Goat Island.

Various houses in "The Point" were occupied by British and French forces during the American Revolution around the time of the Battle of Rhode Island. The famous Goddard and Townsend furniture makers lived and worked in The Point, and their houses still remain.[1] Battery Park was created from Fort Greene, a former military battery from the War of 1812, on the site of a previous battery from the American Revolution.

Newport has remained largely unindustrialized, so many of the historic colonial houses were not demolished, as was done in Boston and New York. As a result, Newport allegedly has the highest concentration of colonial homes of any American city. The Point, however, was largely neglected by the 1950s and remained a working class area. In the 1960s and 70s, Doris Duke's Newport Restoration Foundation bought 27 historic houses in The Point, restored them, and currently rents the homes to tenants. In the 1960s, the construction of the Newport Bridge divided the neighborhood in two.

The Point is home to the Hunter House museum, the Rumbline Restaurant, and Saint John the Evangelist Anglican-Catholic Church.[2] The old docks disappeared at the end of the streets but the driftways remained, allowing public access to the harbor for boaters.[3]

All content from Kiddle encyclopedia articles (including the article images and facts) can be freely used under Attribution-ShareAlike license, unless stated otherwise. Cite this article:
Easton's Point Facts for Kids. Kiddle Encyclopedia.