Tiverton is a town in Newport County, Rhode Island, United States. The population was 15,780 at the 2010 census.

Tiverton is located on the eastern shore of Narragansett Bay, across the Sakonnet River from Aquidneck Island (also known as the Island of Rhode Island). Together with the adjacent town of Little Compton, the area is disconnected from the rest of the state of Rhode Island. The northern portion of the town is located on Mount Hope Bay.

Much of the town is located along a granite ridge which runs in a north-south direction, rising approximately 170 feet in elevation from the bay. A large section of exposed granite can be observed at the highway cut for Route 24, near the Main Road interchange.

There were 6,077 households out of which 29.6% had children under the age of 18 living with them, 60.2% were married couples living together, 8.8% had a female householder with no husband present, and 27.5% were non-families. 23.1% of all households were made up of individuals and 11.7% had someone living alone who was 65 years of age or older. The average household size was 2.51 and the average family size was 2.95.

Both beaches are located on the Sakonnet River. The cool breeze blows strong throughout the year. The beaches in Tiverton are Fogland Beach, which has lifeguards, and also can be used for fishing, walking, and wildlife/nature observation. It is popular destination for windsurfing,with rentals being available. The town also offers kayaking and paddleboarding programs through a local company.

Grinnell's Beach provides an excellent windsurfing area, and a view of the Sakonnet River and Portsmouth shoreline. Amenities include changing rooms, showers, and a children's playground.

Fogland Beach also has lifeguards, and has areas for fishing, and walking. The cove area to the north of the beach is convenient for nature study. 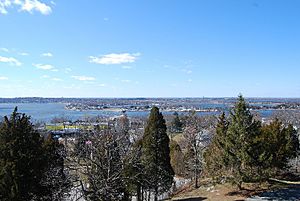 Men from the Tiverton outpost took part in the Battle of Freetown, on May 25, 1778, during the Revolutionary War. On the 31st of the same month, a party of about 150 British regulars of the 22nd Regiment under the command of Lieutenant-Colonel Campbell attacked the town. Rivington's Gazette reported that the British were making a preemptive attack based on intelligence that the American militia at Tiverton was preparing an attack against them. However, another report in the New Hampshire Gazette stated the militia was waiting in prepared defensive positions. The result of this skirmish was two British killed, several more wounded, and some fire damage to the lower mill in Tiverton. None of the militiamen were wounded or killed.

For about three years of that war, December 1776 – October 1779, Rhode Island proper (now known as Aquidneck Island) was occupied by the British. During this time, Tiverton was a refuge for Americans fleeing this occupation, and a mustering place for colonial forces, gathering to drive away the British. (The occupying forces eventually were withdrawn strategically, as General Clinton marshalled his forces for the 1780 British invasion of South Carolina.)

In its early days, Tiverton was chiefly a farming community with some fishing and boat construction. Until 1900 the manufacture of menhaden oil, a fish derivative, was one of the primary industrial pursuits. Cotton and woolen mills were established as early as 1811, when Colonel Joseph Durfee established a spinning mill at Cook Pond, in what it now the city of Fall River, Massachusetts.

In 1856, the northern part of the town was set apart from Tiverton, and renamed Fall River, Rhode Island, by the Rhode Island General Assembly. On March 1, 1862, in a case between the states that reached the United States Supreme Court, both Fall Rivers were made part of Massachusetts and the state boundary was placed in its current location near State Avenue.

Mark's Stadium is a former soccer stadium located in North Tiverton, Rhode Island. During the 1920s and early 1930s, it was the home of Fall River Marksmen, one of the era’s most successful soccer teams. It is one of the earliest examples of a soccer-specific stadium in the United States. After the demise of the Marksmen, the stadium was used as a home ground by other local teams, most notably Fall River F.C. and Ponta Delgada S.C..

In July 1997 the National Weather Service (NWS) based in Taunton, Massachusetts established a cooperative weather station in the Stone Bridge Village section of town. Named Tiverton-2SW, this station serves as an official meteorological recording station for the town of Tiverton, RI. Data from Tiverton-2SW is collected by the NWS in Taunton, MA as well as the National Climatic Data Center in Asheville, North Carolina.

As of 2006, trade establishments are the major employers in the town. Since the mid-20th century, Tiverton has grown as a summer resort and residential area, and as a suburb of Fall River, Massachusetts. During the 1960s, Route 24 was constructed through the northern part of the town, connecting Tiverton with Newport, Rhode Island via the Sakonnet River Bridge.

In 2002, contaminated soil (including some soil that was blue) was discovered in the Bay Street neighborhood of Tiverton. In 2003, private property testing began. Contaminants including arsenic, lead, cyanide, and more were found at levels above residential exposure guidelines. Residents have been prohibited from digging in the soil. ENACT (Environmental Neighborhood Awareness Committee of Tiverton) advocates on behalf of the community. Property values in the neighborhood have plummeted due to the contamination and moratorium on digging soil, which meant that residents of this neighborhood have lost their home equity. One of ENACT's successes has been the passage of legislation in the Rhode Island statehouse to create the Environmentally Contaminated Home Ownership (ECHO) loan program, which provides loans for people whose home equity has been sharply reduced due to contamination. The Rhode Island Department of Environmental Management (RIDEM) has been involved in developing work plans to treat the contamination.

In 2015, the Town was recognized as a Stormready Community by the National Weather Service.

All content from Kiddle encyclopedia articles (including the article images and facts) can be freely used under Attribution-ShareAlike license, unless stated otherwise. Cite this article:
Tiverton, Rhode Island Facts for Kids. Kiddle Encyclopedia.