East Freetown is one of two villages in the town of Freetown, Bristol County, Massachusetts, United States. Added to the town in 1747, East Freetown was originally an outpost settlement of Tiverton, Rhode Island, then a part of Massachusetts. It rests on the shore of Long Pond.

East Freetown was made a part of Freetown as a result of the Pocasset Purchase of 1747. It remained less economically developed and industrialized than its sister village, Assonet well into the 20th century. The village was the birthplace of Massachusetts Governor Marcus Morton. 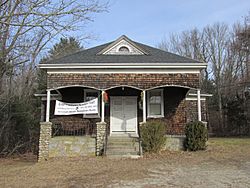 The East Freetown Historic District has been on the National Register of Historic Places since 1999. It contains many buildings, sites, and features of local historical significance. The district is located roughly along Howland, Gurney, Washburn County Roads.

East Freetown is located in Southeastern Massachusetts. It is bounded by Dartmouth, Fall River, New Bedford, Lakeville, Assonet, Rochester, Acushnet, and Long Pond. It has a hilly terrain, with many outcroppings of bedrock. Maple, elm, oak, pine, and birch trees are common throughout. Numerous streams and brooks flow through the village, including Fall Brook.

Many peninsulas exist around Long Pond, laying site for summer resorts such as Heaven's Heights and Hemlock Point. A small portion of the village comprises a part of the Freetown-Fall River State Forest.

All content from Kiddle encyclopedia articles (including the article images and facts) can be freely used under Attribution-ShareAlike license, unless stated otherwise. Cite this article:
East Freetown, Massachusetts Facts for Kids. Kiddle Encyclopedia.