Rochester is a town in Plymouth County, Massachusetts, United States. The population was 5,717 at the 2020 census.

Rochester was settled in 1679 on the lands called "Sippican" by the local Wampanoags, along the coast of Buzzards Bay. (Sippican was the name of the local tribe.) It originally included the lands of Mattapoisett, Marion and parts of Wareham (which was lost when Wareham was founded in 1739). The town was officially incorporated on June 4, 1686 as Rochester, and was renamed for Rochester, England, from which early settlers to the town came. The town originally thrived with the early shipbuilding and whaling trade in Mattapoisett Harbor. However, in 1852 and 1857 the towns of Marion and Mattapoisett, respectively, were separated and incorporated as separate towns, thus landlocking Rochester. Since that time, the town has become mostly rural-residential, with some farms located in town. Rochester is a "Right to Farm" community. 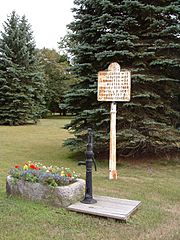 An old road sign and water pump at the Town Common, on Route 105

According to the United States Census Bureau, the town has a total area of 36.4 square miles (94 km2), of which 33.9 square miles (88 km2) is land and 2.5 square miles (6.5 km2), or 6.76%, is water. Rochester is located along the western border of Plymouth County, and is bordered by Lakeville and Middleborough to the north, Wareham and Marion to the east, Mattapoisett to the south, and Acushnet and Freetown to the west. The town's localities include Bisbee Corner, East Rochester, North Rochester and Varella Corner. The town is about 10 miles (16 km) northeast of New Bedford, 40 miles (64 km) east of Providence, Rhode Island, and 60 miles (97 km) south of Boston.

The Mattapoisett and Sippican rivers flow through the town, emptying into Buzzards Bay. Most of the town's brooks also flow into these two rivers. The source of the Mattapoisett, Great Quittacas Pond and Little Quittacas Pond, lie on the border between the town and Lakeville. Other ponds include Snipatuit Pond, Long Pond, Snow's Pond, Hartley's Mill Pond, Mary's Pond, Leonards Pond, Mill Pond and Hathaway Pond, as well as several smaller bodies of water. The town has two wildlife management areas and a fish hatchery, as well as a small recreation area along Mary's Pond and two parks near the town center. The town is also the site of the Sippican Rod & Gun Club, near the Haskell Wildlife Management Area.

A small, quarter-mile stretch of Interstate 495 passes through the northeast corner of town, just before its exit on Route 58, which terminates along the town line at Route 28. Along with those two roads, Route 105 travels through town, passing through the town center. The town can also be accessed via Exits 19B (North Street, Mattapoisett) and 20 (Route 105, Marion) along Interstate 195.

The nearest regional bus and air service can be found in New Bedford. The nearest national air service is at T. F. Green Airport in Rhode Island, and the nearest international airport is Logan International Airport in Boston. A freight rail line operated by the Massachusetts Coastal Railroad passes through the northeast corner of town. The nearest inter-city (Amtrak) passenger rail station is in Providence; however, the terminus of the Middleborough-Lakeville line of the MBTA's commuter rail is nearby, providing direct service to Boston.

There were 1,575 households, out of which 38.9% had children under the age of 18 living with them, 72.6% were married couples living together, 6.5% had a female householder with no husband present, and 17.8% were non-families. 13.7% of all households were made up of individuals, and 5.7% had someone living alone who was 65 years of age or older. The average household size was 2.91 and the average family size was 3.20.

Rochester is a member of the 2,700-student Old Rochester Regional School District. The town, along with Marion and Mattapoisett, operate as a single school system with each town having its own school subcommittee. The town operates Rochester Memorial School for kindergarten through sixth-grade students. Seventh- and eighth-grade students attend Old Rochester Regional Junior High School, and high school students attend Old Rochester Regional High School. Both regional schools are located on Route 6 in Mattapoisett, just over the Marion town line. The high school, affectionately known as "O.R.R.," competes in the South Coast Conference for athletics. Their mascot is the bulldog, and their colors are red and white. The town's Thanksgiving Day football rival is Apponequet Regional High School, in Lakeville.

In addition to public schools, high school students may also choose to attend Old Colony Regional Vocational Technical High School, located in North Rochester. Their mascot is the Cougar, and they compete in the Pilgrim Conference for athletics. The curriculum includes shops such as welding, cosmetics, auto, wood work, and many more. The nearest private school is Tabor Academy in Marion.

All content from Kiddle encyclopedia articles (including the article images and facts) can be freely used under Attribution-ShareAlike license, unless stated otherwise. Cite this article:
Rochester, Massachusetts Facts for Kids. Kiddle Encyclopedia.