Marion is a town in Plymouth County, Massachusetts, United States. The population was 4,907 at the 2010 census. 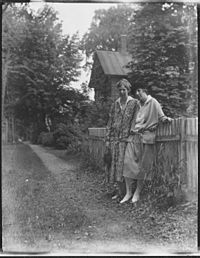 Marion was first settled in 1679 as "Sippican", a district of Rochester, Massachusetts. The name, which also lends itself to the river which passes through the north of town and the harbor at the heart of town, was the Wampanoag name for the local tribe. The town was mostly known for its many local sea captains and sailors whose homes were in town, although there were also some small shipbuilding operations on the harbor as well. By the late 1840s, however, tensions between the village of Mattapoisett and the town led to a battle which sought to redraw the town lines and effectively take over Sippican Village. This caused the villagers to form a committee, which went to Boston to petition for incorporation as its own town. Thus, with the help of a powerful local ally, the town was incorporated on May 14, 1852, and renamed Marion in honor of Revolutionary War hero Francis Marion. Mattapoisett was incorporated in 1857.

Since that time, Marion's economy has mostly relied on the waters of Buzzards Bay, both for fishing and for the summer tourism industry. Recreational sailing is a major seasonal activity for residents and visitors.

Marion is located on Buzzards Bay, and its geography is shaped by the water. Much of the town is separated into two halves by Sippican Harbor, with Converse Point to the west and Sippican Neck to the east. To the west of Converse Point is Aucoot Cove, where Aucoot Creek and Borden's Brook empty into the bay. Sprague's Cove, Hammetts Cove (which is directly east of Little Neck), Blankenship Cove and Planting Island Cove are all coves off of Sippican Harbor. To the east of Sippican Neck is Wings Cove, which separates the neck from Great Hill Point. Along the northeastern border of town is the Weweantic River, which separates the town from Wareham. The Sippican River is also a tributary to this river, and further divides the town from Wareham. Between Sippican Harbor and the Weweantic River lies the Great Swamp. Marion has several parks, as well as wharves, beaches, The Beverly Yacht Club, Little Marion G.C.(public), and The Kittansett Club G.C. (private)

There were 1,996 households out of which 31.7% had children under the age of 18 living with them, 61.4% were married couples living together, 8.4% had a female householder with no husband present, and 27.8% were non-families. 24.1% of all households were made up of individuals and 11.9% had someone living alone who was 65 years of age or older. The average household size was 2.51 and the average family size was 3.00. 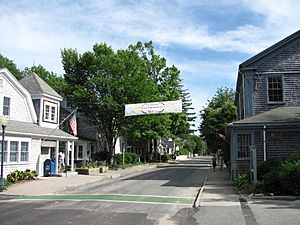 All content from Kiddle encyclopedia articles (including the article images and facts) can be freely used under Attribution-ShareAlike license, unless stated otherwise. Cite this article:
Marion, Massachusetts Facts for Kids. Kiddle Encyclopedia.