Charles Dana Gibson (September 14, 1867 – December 23, 1944) was an American illustrator. He was best known for his creation of the Gibson Girl, an iconic representation of the beautiful and independent Euro-American woman at the turn of the 20th century.

His wife, Irene Langhorne, and her four sisters inspired his images. He published his illustrations in Life magazine and other major national publications for more than 30 years, becoming editor in 1918 and later owner of the general interest magazine.

Gibson was born in Roxbury, Massachusetts on September 14, 1867. He was a son of Josephine Elizabeth (née Lovett) and Charles DeWolf Gibson. He had five siblings and was a descendant of U.S. Senators James DeWolf and William Bradford.

A talented youth with an early interest in art, Gibson was enrolled by his parents in New York City's Art Students League, where he studied for two years. 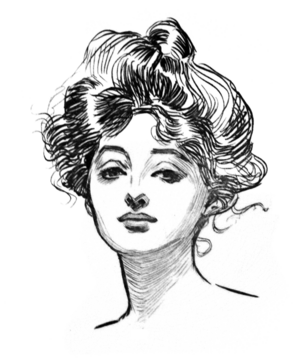 Peddling his pen-and-ink sketches, Gibson sold his first work in 1886 to Life magazine, founded by John Ames Mitchell and Andrew Miller. It featured general interest articles, humor, illustrations, and cartoons. His works appeared weekly in the popular national magazine for more than 30 years. He quickly built a wider reputation, with his drawings being featured in all the major New York publications, including Harper's Weekly, Scribners and Collier's. His illustrated books include the 1898 editions of Anthony Hope's The Prisoner of Zenda and its sequel Rupert of Hentzau as well as Richard Harding Davis' Gallegher and Other Stories. 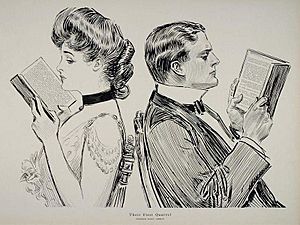 His wife and her elegant Langhorne sisters also inspired his famous Gibson Girls, who became iconic images in early 20th-century society. Their dynamic and resourceful father Chiswell Langhorne had his wealth severely reduced by the Civil War, but by the late 19th century, he had rebuilt his fortune on tobacco auctioneering and the railroad industry.

After the death of John Ames Mitchell in 1918, Gibson became editor of Life and later took over as owner of the magazine. As the popularity of the Gibson Girl faded after World War I, Gibson took to working in oils for his own pleasure. In 1918, he was elected into the National Academy of Design as an Associate member, and became a full Academician in 1932.

He retired in 1936, the same year Scribner's published his biography, Portrait of an Era as Drawn by C. D. Gibson: A Biography by Fairfax Downey. At the time of his death in 1944, he was considered "the most celebrated pen-and-ink artist of his time as well as a painter applauded by the critics of his later work." 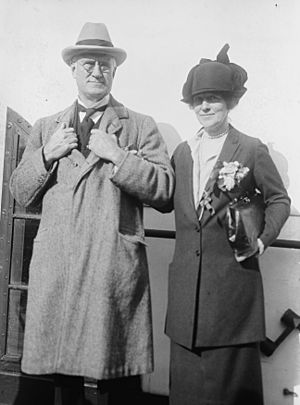 On November 7, 1895, Gibson was married to Irene Langhorne (1873–1956), a daughter of railroad industrialist Chiswell Langhorne. Irene was born in Danville, Virginia, and was one of five sisters, all noted for their beauty, including Nancy Astor, Viscountess Astor, the first woman to serve as a Member of Parliament in the British House of Commons. Together, Irene and Charles were the parents of two children:

For part of his career, Gibson lived in New Rochelle, New York, a popular art colony among actors, writers and artists of the period. The community was most well known for its unprecedented number of prominent American illustrators. Gibson also owned an island off Islesboro, Maine which came to be known as 700 Acre Island; he and his wife spent an increasing amount of time here through the years.

Gibson died of a heart ailment in 1944, aged 77, at 127 East 73rd Street, his home in New York City. After a private funeral service at the Gibson home in New York, he was interred at Mount Auburn Cemetery in Cambridge, Massachusetts. His widow died at her home in Greenwood, Virginia in April 1956 at the age of 83.

Almost unrestricted merchandising saw his distinctive sketches appear in many forms. The Gibson cocktail has been claimed to be named after him, as it is said he favored ordering gin martinis with a pickled onion garnish in place of the traditional olive or lemon zest.

All content from Kiddle encyclopedia articles (including the article images and facts) can be freely used under Attribution-ShareAlike license, unless stated otherwise. Cite this article:
Charles Dana Gibson Facts for Kids. Kiddle Encyclopedia.