Islesboro is a town in Waldo County, Maine, United States. The population was 566 at the 2010 census. It has a summer colony accessible by ferry from Lincolnville Beach 3 miles to the west, or by air taxi service. Home to Warren Island State Park, Islesboro includes the villages of Dark Harbor, Pripet and North Islesboro otherwise known as Guinea.

Penobscot Indians called it Pitaubegwimenahanuk, meaning "the island that lies between two channels." Situated in upper Penobscot Bay, the narrow, 14-mile island is the marker between East and West Penobscot Bay. It was part of the Waldo Patent. First called Long Island Plantation, it was settled in 1769. It was incorporated as Islesborough on January 28, 1789, although over time the spelling was contracted to Islesboro.

With many harbors and coves, the island was home to the largest commercial shipping fleet in the bay during the 19th century. Following the Civil War, however, Islesboro developed as a Gilded Age resort community, and many large summer homes were built by the wealthy. Their large yachts cruised and raced throughout the Gulf of Maine. The town remains an upper-class enclave and summer colony.

There is one large pond, called Meadow Pond, in the Northern portion of the Island, the work of beavers that have dammed a narrow place. Ice was once harvested from this pond for export to places as far away as India. Hewes Point was named for Paola Hewes, an early pioneer settler.

This climatic region is typified by large seasonal temperature differences, with warm to hot (and often humid) summers and cold (sometimes severely cold) winters. According to the Köppen Climate Classification system, Islesboro has a humid continental climate, abbreviated "Dfb" on climate maps.

There were 270 households of which 20.7% had children under the age of 18 living with them, 46.7% were married couples living together, 7.0% had a female householder with no husband present, 5.9% had a male householder with no wife present, and 40.4% were non-families. 34.4% of all households were made up of individuals and 15.2% had someone living alone who was 65 years of age or older. The average household size was 2.07 and the average family size was 2.57. 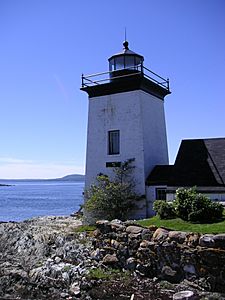 All content from Kiddle encyclopedia articles (including the article images and facts) can be freely used under Attribution-ShareAlike license, unless stated otherwise. Cite this article:
Islesboro, Maine Facts for Kids. Kiddle Encyclopedia.