Lincolnville is a town in Waldo County, Maine, United States. The population was 2,164 at the 2010 census. Lincolnville is the mainland terminal for state ferry service to Islesboro. 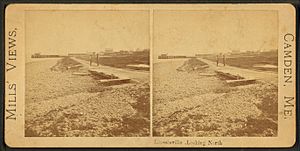 Approximately 10,000 years ago, a glacier covered the area to a depth of several thousand feet, carving irregular landforms that survive today. The earliest artifact of European origin was fragments of a 1650-1660 clay pipe, probably a trade good with the native population. First settled in 1774, the town was incorporated in 1802 from Canaan and Ducktrap plantations. It was named for General Benjamin Lincoln, a Revolutionary War General and friend of Henry Knox.

The first school in Lincolnville was a three-sided log cabin with a perpendicular ledge for a fourth wall behind Nathan Knight's home; the ledge served to support a blackboard.

Over the years, the population continued to grow until it was incorporated in 1802. A bicentennial celebration was celebrated by the town in 2002.

The town is served by U.S. Route 1, Maine State Routes 173, 52 and 235. It is bordered by Belmont on the north, Northport on the northeast, Penobscot Bay on the east, Camden on the south, Hope on the west and Searsmont on the northwest.

There were 959 households of which 25.4% had children under the age of 18 living with them, 55.1% were married couples living together, 6.9% had a female householder with no husband present, 4.3% had a male householder with no wife present, and 33.8% were non-families. 26.1% of all households were made up of individuals and 10.1% had someone living alone who was 65 years of age or older. The average household size was 2.26 and the average family size was 2.70.

All content from Kiddle encyclopedia articles (including the article images and facts) can be freely used under Attribution-ShareAlike license, unless stated otherwise. Cite this article:
Lincolnville, Maine Facts for Kids. Kiddle Encyclopedia.