Bath is a city in Sagadahoc County, Maine, in the United States. The population was 8,514 at the 2010 census, and 8,329 as of 2018; the population has had a change of -10.2% since 2000. It is the county seat of Sagadahoc County, which includes one city and 10 towns. The city is popular with tourists, many drawn by its 19th-century architecture. It is home to the Bath Iron Works and Heritage Days Festival, held annually on the Fourth of July weekend. It is commonly known as "The City of Ships" because of all the sailing ships that were built in the Bath shipyards. Bath is part of the metropolitan statistical area of Greater Portland.

Abenaki Indians called the area Sagadahoc, meaning "mouth of big river." It was a reference to the Kennebec River, which Samuel de Champlain explored in 1605. Popham Colony was established in 1607 downstream, together with Fort St George. The settlement failed due to harsh weather and lack of leadership, but the colonists built the New World's first oceangoing vessel constructed by English shipwrights, the Virginia of Sagadahoc. It provided passage back to England. Most of Bath, Maine, was settled by travelers from Bath, England.

The next settlement at Sagadahoc was about 1660, when the land was taken from an Indian sagamore known as Robinhood. Incorporated as part of Georgetown in 1753, Bath was set off and incorporated as a town on February 17, 1781. It was named by the postmaster, Dummer Sewell, after Bath in Somerset, England. In 1844, a portion of the town was set off to create West Bath. On June 14, 1847, Bath was incorporated as a city, and in 1854 designated county seat. Land was annexed from West Bath in 1855.

Several industries developed in the city, including lumber, iron and brass, with trade in ice and coal. But Bath is renowned for shipbuilding, which began here in 1743 when Jonathan Philbrook and his sons built 2 vessels. Since then, roughly 5,000 vessels have been launched in the area, which at one time had more than 200 shipbuilding firms. Bath became the nation's fifth largest seaport by the mid-19th century, producing clipper ships that sailed to ports around the world. The last commercial enterprise to build wooden ships in the city was the Percy & Small Shipyard, which was acquired for preservation in 1971 by the Maine Maritime Museum. But the most famous shipyard is the Bath Iron Works, founded in 1884 by Thomas W. Hyde who also became the general manager of it in 1888. It has built hundreds of wooden and steel vessels, mostly warships for the U.S. Navy. During World War II, Bath Iron Works launched a new ship an average of every 17 days. The shipyard is a major regional employer, and operates today as a division of the General Dynamics Corporation.

The city is noted for its Federal, Greek Revival, and Italianate architecture, including the 1858 Custom House and Post Office designed by Ammi B. Young. Bath is sister city to Shariki (now Tsugaru) in Japan, where the locally-built full rigged ship Cheseborough was wrecked in 1889. Scenes from the movies Message in a Bottle (1999) and The Man Without a Face (1993) were filmed in the city.

The city of Bath includes several nature preserves that are protected by the Kennebec Estuary Land Trust. These areas include, Thorne Head Preserve (located 2.1 miles north of Bath,) Butler Head Preserve (location 5.2 miles north of Bath,) there are also numerous multiple parks, and walking trails located throughout the town such as the Whiskeag Trail.

Panoramic view of Sagadahoc Bridge with the old bridge behind it, Bath, Maine, USA 2012 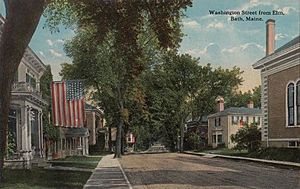 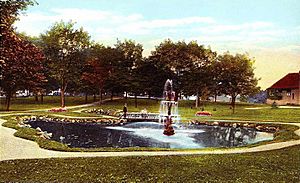 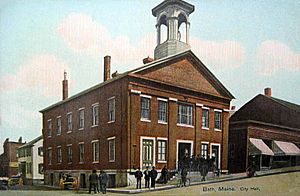 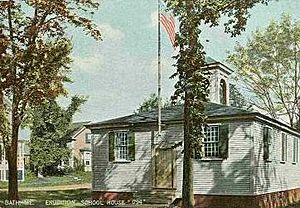 All content from Kiddle encyclopedia articles (including the article images and facts) can be freely used under Attribution-ShareAlike license, unless stated otherwise. Cite this article:
Bath, Maine Facts for Kids. Kiddle Encyclopedia.