Georgetown is a town in Sagadahoc County, Maine, United States. The population was 1,058 at the 2020 census. Home to Reid State Park, the town is part of the Portland–South Portland–Biddeford, Maine Metropolitan Statistical Area. Located on an island accessible by car from the mainland, Georgetown includes the villages of Five Islands, Georgetown, Bay Point, Marrtown, West Georgetown and Robinhood. It is a popular tourist destination.

Abenaki Indians called the island Erascohegan, meaning "good spear-fishing." John Parker, a fisherman from Bedfordshire, England, purchased it in 1649 from Chief Mowhotiwormet, commonly known as Chief Robinhood, for a hogshead of rum and some pumpkins. Parker built the first permanent homestead on what eventually became known as Parker's Island. 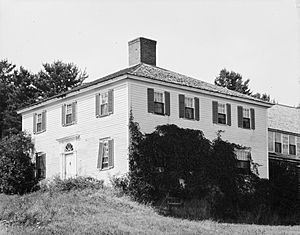 Front of the Benjamin Riggs House, located along Robinhood Road in Georgetown, a town in Sagadahoc County, Maine, United States. Built in 1790, it is listed on the National Register of Historic Places

The Kennebec River valley was attacked and burned in 1676 during King Philip's War, then again in 1689 at the outset of King William's War, and was not resettled until after the 1713 Treaty of Portsmouth. The town of Newtown-on-Arrowsic was rebuilt in 1714 on the southern end of Arrowsic Island, which was incorporated in 1716 by the Massachusetts General Court as Georgetown-on-Arrowsic, named for Fort St. George. The town's boundaries were extended to encompass Parker's Island, Woolwich, Phippsburg and Bath (which included West Bath). Abandoned during Dummer's War and beleaguered during the French and Indian Wars, the region resettled slowly in the 1750s until peace was assured with the 1759 Fall of Quebec.

About half of Parker's Island provided grazing land, and some residents raised livestock and produced butter and cheese. In 1858, there were two sawmills, two shingle mills, a pailmaker and a shipbuilder. But the merchant marine and fishing were the town's principal occupations. By 1841, all the other parts of Georgetown had been set off and incorporated as towns, leaving Parker's Island with sole claim to the ancient name. Situated between the mouths of the Sheepscot and Kennebec rivers on the Gulf of Maine, Georgetown developed into a summer resort, attracting a number of prominent artists. The island is a noted site for bird watching.

It is crossed by Maine State Route 127. The island is separated by water from Westport to the northeast, Southport to the east, Phippsburg to the west, Arrowsic to the northwest, and Woolwich to the north.

There were 469 households, of which 22.2% had children under the age of 18 living with them, 55.7% were married couples living together, 5.1% had a female householder with no husband present, 2.8% had a male householder with no wife present, and 36.5% were non-families. 29.9% of all households were made up of individuals, and 11.3% had someone living alone who was 65 years of age or older. The average household size was 2.22 and the average family size was 2.77.

All content from Kiddle encyclopedia articles (including the article images and facts) can be freely used under Attribution-ShareAlike license, unless stated otherwise. Cite this article:
Georgetown, Maine Facts for Kids. Kiddle Encyclopedia.