Phippsburg is a town in Sagadahoc County, Maine, United States, on the west side of the mouth of the Kennebec River. The population was 2,216 at the 2010 census. It is within the Portland–South Portland–Biddeford, Maine, metropolitan statistical area. A tourist destination, Phippsburg is home to Bates-Morse Mountain Conservation Area, Fort Popham State Historic Site; it is also home to Fort Baldwin which overlooks Fort Popham, and Popham Beach State Park, as well as Pond Island National Wildlife Refuge. The town includes part of Winnegance.

Site of the Popham Colony, Phippsburg was — between 1607 and 1608 — the first known English settlement attempt in New England. During its brief existence, colonists built Virginia of Sagadahoc, the first ship in Maine's long history of shipbuilding.

The next British settlement at the mouth of the Kennebec River began in 1653; Thomas Atkins, a fisherman, purchased from the sachem Mowhotiwormet, commonly called Chief Robinhood, the southern end of Phippsburg (with the exception of Popham). Atkins Bay bears his name. The population gradually increased until King Philip's War, when Indians in August 1676 attacked the eastern side of the Kennebec River, killing the colonists, or else carrying them into captivity. Dwellings were burned and stocks of cattle killed. The entire area was abandoned.

Resettlement commenced in 1679 at Newtown, located on the southern end of Arrowsic Island (across the river from present-day Phippsburg Center). About 1684, Francis Small had a trading post at Cape Small, which bears his name. But in 1689 the area was again destroyed and deserted during King William's War. With the Treaty of Portsmouth in 1713, conflict was formally ended between the Abenaki Indians and English settlements. In 1714, Newtown was reestablished, then incorporated in 1716 as Georgetown-on-Arrowsic by the Massachusetts General Court. Also in 1716, the Pejepscot Proprietors established a little fishing village called Augusta at the Small Point Harbor area of Phippsburg. Dr. Oliver Noyes, director of the colony, erected a stone fort 100 feet (30 meters) square to protect it. In 1717, Governor Samuel Shute held a conference at Georgetown-on-Arrowsic with tribal delegates, who arrived in a flotilla of canoes and encamped on Lee Island.

But in summer of 1723 during Dummer's War, the Norridgewocks and 250 of their Indian allies from Canada, incited by the French missionary Sebastien Rale, attacked the area. Again it was deserted, with the stone fort destroyed. Governor William Dummer's Treaty of 1725 restored peace, and in 1737 an attempt was made to resettle Cape Small Point. The boundaries of Georgetown-on-Arrowsic were enlarged to encompass most of present-day Phippsburg, Bath (which then included West Bath), Woolwich and Georgetown.

Slow resettlement of the Phippsburg peninsula found ten farms along the Kennebec River by 1751, with five more on the Casco Bay side. But the districts gathered into Georgetown-on-Arrowsic began splitting away; in 1759, Woolwich withdrew, followed in 1781 by Bath. In 1814, Phippsburg was set off and incorporated. The original petition requested that it be named Dromore after one of the town's oldest sections, but Massachusetts chose instead to honor one of its royal governors, Sir William Phips — actually a native of Woolwich.

Between 1842 and 1890, wooden ships were built at Phippsburg. It also had numerous tidal mills.

Fort Popham was built during the Civil War to guard the mouth of the Kennebec, on the site of a much smaller battery built in 1808. It became the control center for an underwater minefield in the 1890s. The more modern Fort Baldwin was built between 1905 and 1912 and was garrisoned in both World Wars.

During the Gilded Age, Popham Beach developed into a resort area, with steamboats transporting excursionists from Bath. Today, the town's principal industries are fishing and tourism.

Phippsburg was the site of the discovery, in 1971, of the Spirit Pond runestones, purported evidence of pre-Columbian European exploration of North America, considered widely a hoax by academics. The three stones were found by Walter J. Elliot, Jr., a carpenter from Bath, Maine. The runestones are now in the possession of the Maine State Museum in Augusta, Maine.

According to the United States Census Bureau, the town has a total area of 71.20 square miles (184.41 km2), of which, 28.58 square miles (74.02 km2) of it is land and 42.62 square miles (110.39 km2) is water. Connected to Bath by a bridge and causeway over Winnegance Creek and sharing a border with West Bath to the east of Winnegance, Phippsburg is on a peninsula dividing the Kennebec River from Casco Bay in the Gulf of Maine, part of the Atlantic Ocean.

Phippsburg is crossed by state routes 209 and 216. Separated by water, the peninsula is near the towns of Harpswell to the west, West Bath to the northwest, Bath to the north, Arrowsic to the northeast, and Georgetown to the east.

There were 963 households, of which 22.8% had children under the age of 18 living with them, 58.5% were married couples living together, 6.5% had a female householder with no husband present, 4.0% had a male householder with no wife present, and 30.9% were non-families. Of all households 24.0% were made up of individuals, and 9.1% had someone living alone who was 65 years of age or older. The average household size was 2.30 and the average family size was 2.67. 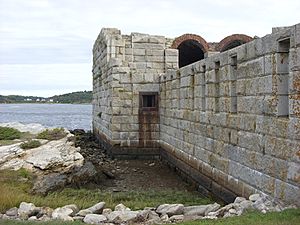 All content from Kiddle encyclopedia articles (including the article images and facts) can be freely used under Attribution-ShareAlike license, unless stated otherwise. Cite this article:
Phippsburg, Maine Facts for Kids. Kiddle Encyclopedia.