Woolwich is a town in Sagadahoc County, Maine, United States. The population was 3,068 at the 2020 census. It is part of the Portland–South Portland–Biddeford, Maine metropolitan statistical area. Woolwich is a suburb of the city of Bath located on the opposite shore of Merrymeeting Bay.

Called Nequasset after Nequasset lake by Abenaki Indians, it was first settled in 1638 by Edward Bateman and John Brown. They would purchase the land in 1639 from the sachem Mowhotiwormet, commonly known as Chief Robinhood, who lived near Nequasset Falls. At Day's Ferry on the Kennebec River, Richard Hammond operated a fortified trading post. His household of 16, including servants, workmen and stepchildren, conducted a lucrative fur trade with the Indians. But in the first blow of King Philip's War in the area, on the evening of August 13, 1676, warriors ingratiated themselves into the stockaded trading post, then killed the elderly Hammond and his stepson as they returned for the night. Others were taken into captivity. Buildings were looted and burned, and the cattle slain.

Nequasset was attacked during King William's War, when inhabitants were again massacred or forced to abandon their homes. It was assailed again in 1723 during Dummer's War, when the Norridgewocks and their 250 Indian allies from Canada, incited by the French missionary Sebastien Rale, burned dwellings and killed cattle. Following Governor William Dummer's peace treaty of 1725, resettlement would be slow. During the French and Indian War, on June 9, 1758, Indians raided the village, killing members of the Preble family and taking others prisoner to Quebec. This incident became known as the last conflict on the Kennebec River.

Nequasset had become a district of Georgetown, but on October 20, 1759, the plantation was set off and incorporated by the Massachusetts General Court, named after Woolwich, England.

The peninsula was heavily wooded, providing timber for shipbuilding. It also had excellent soil for agriculture. By 1858, industries included two sawmills, two gristmills and a shipyard. By 1886, the community also produced bricks and leather. 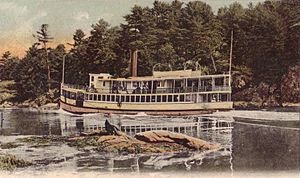 The U. S. Army Corps of Engineers twice widened Upper Hell Gate on the Sasanoa River, which separates Woolwich from Arrowsic. Originally constricted by curves and ledges, which were made even more dangerous by swift currents, the half mile (0.8 kilometer) stretch was widened in 1898 to a minimum of 90 feet (27 meters), then again in 1908 to a minimum of 140 feet (40 meters) and depth of 12 feet (4 meters). The Sasanoa River now permits navigation between Bath and Boothbay Harbor.

It is crossed by U. S. Route 1, and state routes 127 and 128. It borders the towns of Dresden to the north and Wiscasset to the east. Separated by water, it is near Bowdoinham to the west, Bath to the southwest, Arrowsic to the south, and Westport to the southeast.

There were 1,241 households, of which 30.1% had children under the age of 18 living with them, 62.6% were married couples living together, 6.6% had a female householder with no husband present, 3.9% had a male householder with no wife present, and 26.8% were non-families. 19.0% of all households were made up of individuals, and 7.2% had someone living alone who was 65 years of age or older. The average household size was 2.48 and the average family size was 2.82.

All content from Kiddle encyclopedia articles (including the article images and facts) can be freely used under Attribution-ShareAlike license, unless stated otherwise. Cite this article:
Woolwich, Maine Facts for Kids. Kiddle Encyclopedia.