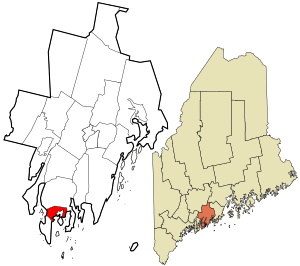 Location in Lincoln County and the state of Maine.

Boothbay Harbor is a town in the county of Lincoln, state of Maine, in the United States. The population was 2,165 at the 2010 census. During summer months, the entire Boothbay Harbor region is a popular yachting and tourist destination. ZIP Code is 04538. The community is served by the 633 exchange in Area Code 207. 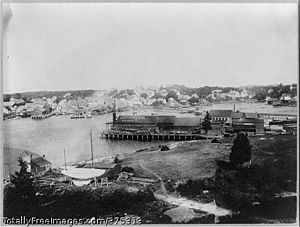 The area was part of Cape Newagen, where the English established an early seasonal fishing camp. In 1666, Henry Curtis purchased the land from the sachem Mowhotiwormet, commonly known as Chief Robinhood, who lived at what is today Woolwich. But the settlement was attacked and burned during King Philip's War, resettled shortly afterwards, then destroyed again in 1689 during King William's War. It was abandoned for 40 years.

In 1730, Colonel David Dunbar, the superintendent and governor of the Territory of Sagadahock, laid out a new town, named Townsend after Viscount Townshend. Despite predations during the French and Indian Wars, and robberies during the Revolutionary War by marauding British sailors, the settlement was successful, not least because of its large, deep and protected harbor. During the Penobscot Expedition, in 1779 Townsend became a rendezvous point for the American naval fleet prior to its disastrous encounter with the British at Castine.

Renamed Boothbay in 1842, the harbor continued to develop as a fishing center. In bad weather, it could hold at a time between 400 and 500 vessels, often Friendship Sloops, seeking shelter. By 1881, it had a fishery and fish oil company, an ice company, two marine railways, a fertilizer manufacturer, and a factory for canning lobsters. On February 16, 1889, the community was set off from Boothbay and incorporated as the town of Boothbay Harbor. Frank L. Sample shipyard at Boothbay Harbor built minesweepers for the United States Navy during World War II and into the 1950s. Some location filming for the 1956 movie version of Rodgers and Hammerstein's Carousel, notably the "June Is Bustin' Out All Over" sequence, was done there. Each summer, Boothbay Harbor draws crowds of tourists. Attractions include the state aquarium, art galleries, restaurants, boat tours to coastal islands and whale watching.

The town is crossed by state routes 27 and 96. It borders the towns of Southport to the southwest, and Boothbay to the north and east. 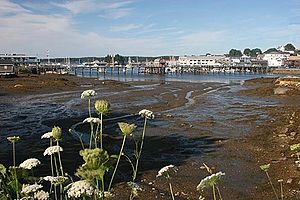 There were 1,084 households of which 14.9% had children under the age of 18 living with them, 40.9% were married couples living together, 7.3% had a female householder with no husband present, 2.6% had a male householder with no wife present, and 49.3% were non-families. 41.8% of all households were made up of individuals and 22.6% had someone living alone who was 65 years of age or older. The average household size was 1.90 and the average family size was 2.52.

There were 1,097 households out of which 21.9% had children under the age of 18 living with them, 46.4% were married couples living together, 8.4% had a female householder with no husband present, and 42.8% were non-families. 36.6% of all households were made up of individuals and 18.4% had someone living alone who was 65 years of age or older. The average household size was 2.05 and the average family size was 2.67.

All content from Kiddle encyclopedia articles (including the article images and facts) can be freely used under Attribution-ShareAlike license, unless stated otherwise. Cite this article:
Boothbay Harbor, Maine Facts for Kids. Kiddle Encyclopedia.