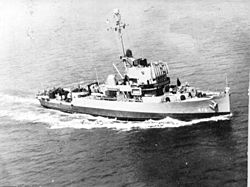 A minesweeper is a small naval warship designed to sweep the water clear of mines. Minesweepers keep waterways clear for shipping. They are quieter and less magnetic than other ships, so the mines won't explode when being swept.

In Great Britain, naval leaders knew before World War I that sea mines were a threat to the nation's shipping. The real threat was not invasion, but blockade aided by mines. Fishing nets pulled behind boats gave an idea on how to clear mines. The Royal Navy used fishermen and their fishing trawlers to keep the English Channel clear of mines. They were supplied with mine gear, rifles, uniforms and pay as the first minesweepers.

The dedicated, purpose-built minesweeper first appeared during World War I. By the end of the war, naval mine technology had grown beyond the ability of minesweepers to detect and remove.

Minesweeping made big advances during World War 2. Fighting nations quickly adapted ships to the task of minesweeping. Both Allied and Axis countries made heavy use of minesweepers throughout the war. Underwater mines remained a problem even after the war ended, and minesweepers were still in use after Japan surrendered to the United States.

After World War 2, allied countries worked on new types of minesweepers. The United States Navy used special landing craft (shallow-water boats) to clear shallow harbors in and around North Korea. As of June 2012[update], the U.S. Navy had four minesweepers in the Persian Gulf.

All content from Kiddle encyclopedia articles (including the article images and facts) can be freely used under Attribution-ShareAlike license, unless stated otherwise. Cite this article:
Minesweeper Facts for Kids. Kiddle Encyclopedia.