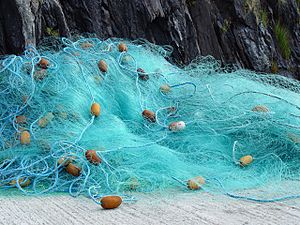 A fishing net is a net used for fishing. Nets are devices made from fibers woven in a grid-like structure. Some fishing nets are also called fish traps, for example fyke nets. Fishing nets are usually meshes formed by knotting a relatively thin thread. Early nets were woven from grasses, flaxes and other fibrous plant material. Later cotton was used. Modern nets are usually made of artificial polyamides like nylon, although nets of organic polyamides such as wool or silk thread were common until recently and are still used.

Fishing nets in the past

Ropes and lines are made of fibre lengths, twisted or braided together to provide tensile strength. They are used for pulling, but not for pushing. The availability of reliable and durable ropes and lines has had many consequences for the development and utility of fishing nets, and influences particularly the scale at which the nets can be deployed. 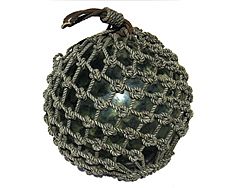 Some types of fishing nets, like seine and trammel, need to be kept hanging vertically in the water by means of floats at the top. Various light "corkwood"-type woods have been used around the world as fishing floats. Floats come in different sizes and shapes. These days they are often brightly coloured so they are easy to see.

The Cucuteni-Trypillian culture, ce. 5500 BC to 2750 BC, created ceramic weights in various shapes and sizes which were used as loom weights when weaving, and also were attached to fishing nets.

Despite their ornamental value, dog conches are traditionally used by local fishermen as sinkers for their fishing nets.

Other methods of catching fish

All content from Kiddle encyclopedia articles (including the article images and facts) can be freely used under Attribution-ShareAlike license, unless stated otherwise. Cite this article:
Fishing net Facts for Kids. Kiddle Encyclopedia.