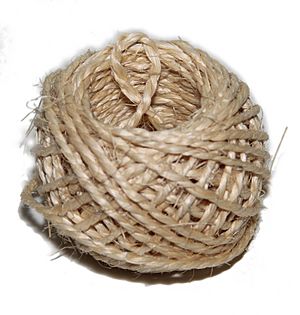 Twine (also called baler twine) is a light string or strong thread made from two or more smaller strands or yarns twisted together. More generally, the term can be applied to a cord. It is often synonymous with string but is usually thicker. Natural fibres used for making twine include cotton, sisal, jute, hemp, henequen, and coir. A variety of synthetic fibres may also be used. Twine is available in colors, plain or waxed. Twine is as useful as duct tape in that it can be used for a wide variety of repairs. 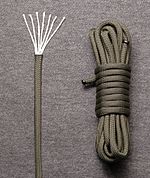 Parachute cord made from 7 twines of nylon

In arts and crafts, twine is used for a wide variety of projects. It is used in knitting, crocheting, and making jewellery, to mention just a few. Commercially, twine is used in upholstery, rug-making, agriculture, the cotton industry, textiles, and in the carton industry.

Twine traces its history back to as early as 32,000 years ago. Wild flax fibers were used to make twine for clothing, baskets and creating tools. Hunter-gatherers processed flax into strong cords or twine.

Archaeologists discovered flax fiber cords in a western Asian cave that date from 32,000 to 26,000 years ago. In a cave at Lascaux, France fossilized remains of a “two-ply laid rope of about 7 mm diameter” were dated to about 15,000 BCE. Hemp twine was used from about 8,000 BCE. By 1,000 BCE hemp rope and twine was used by most civilizations. From 500 BCE to 1900 AD almost all rope and twine used in sailing ships was made from hemp. For example, the USS Constitution used hemp for its rigging lines. Sea bags and other common goods used help cordage or twine.

In the 1630s hemp was used to produce cordage in Boston. Soon there were several ropewalks in Boston producing hemp rope. Hemp twine was twisted into rope.

All content from Kiddle encyclopedia articles (including the article images and facts) can be freely used under Attribution-ShareAlike license, unless stated otherwise. Cite this article:
Twine Facts for Kids. Kiddle Encyclopedia.