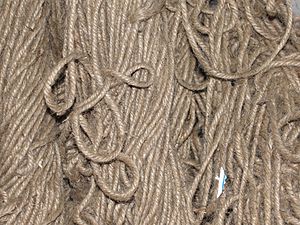 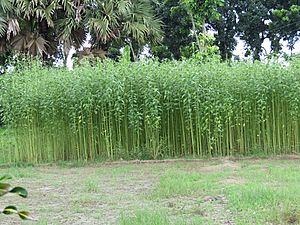 Jute is a vegetable fibre. It is very cheap to produce, and its production levels are similar to that of cotton. It is a bast fibre, like hemp, and flax. Coarse fabrics made of jute are called hessian, or burlap in America. Like all natural fibres, Jute is biodegradable."Jute" is the name of the plant or fiber that is used to make burlap, Hessian or gunny cloth. Jute is also used to make ghillie suits, which are used as camouflage and resemble grasses or brush.

The jute plant is easily grown in tropical countries like Bangladesh and India. Ninety percent of world's jute is harvested in Bangladesh and the rest in India. Jute is less expensive than cotton, but cotton is better for quality clothes. Jute is used to make various products: packaging materials jute bags, sacks to expensive carpets, espadrilles, sweaters etc.

It is obtained from the bark of the jute plant. Jute plants are easy to grow, have a high yield per acre and, unlike cotton, have little need for pesticides and fertilizers.

Jute is one of the most affordable natural fibers in existence and it is second only to cotton in amount produced and variety of uses. The industrial term for jute fiber is raw jute. The fibers are off-white to brown, and 1–4 metres (3–13 feet) long. Jute is also called the golden fiber for its color and high cash value. 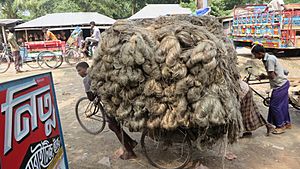 Jute has been shown to exist in the Bronze Age in Iran. Historical documents state that the poor villagers of India used to wear clothes made of jute. Simple hand-looms and hand spinning wheels were used by the weavers, who used to spin cotton yarns as well. History also suggests that Indians, especially Bengalis, used ropes and twines made of white jute from ancient times for household and other uses. It is highly functional in carrying grains or other agricultural products.

For centuries, jute has been an integral part of the culture of East Bengal and some parts of West Bengal. Since the seventeenth century the British started trading in jute. During the reign of the British Empire, jute was also used in the military. British jute barons grew rich processing jute and selling manufactured products made from jute. Dundee Jute Barons and the British East India Company set up many jute mills in Bengal and by 1895 jute industries in Bengal overtook the Scottish jute trade. Many Scots emigrated to Bengal to set up jute factories. 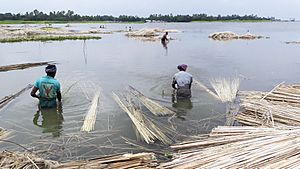 Jute is chiefly grown in India and Bangladesh. The natural condition of these area's are ideal to its cultivation

More than a billion jute sandbags were exported from Bengal to the trenches during World War I and also exported to the United States southern region to bag cotton. It was used in the fishing, construction, art and the arms industry. Initially, due to its texture, it could only be processed by hand until it was discovered in Dundee that by treating it with whale oil, it could be treated by machine. The industry boomed throughout the eighteenth and nineteenth centuries, but this trade had largely ceased by about 1970 due to the emergence of synthetic fibers. In the 21st century, jute again rose to be an important crop for export around the world in contrast to synthetic fiber, mainly from Bangladesh.

Jute is the most environment-friendly fiber starting from the seed to expired fiber, as the expired fibers can be recycled more than once. 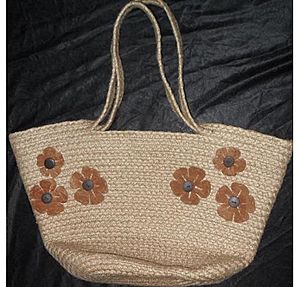 Jute Bag made in Bangladesh

Making twine, rope, and matting are among its uses. In combination with sugar, the possibility of using jute to build aeroplane panels has been considered. Diversified byproducts from jute can be used in cosmetics, medicine, paints, and other products.

Jute is in great demand due to its cheapness, softness, length, lustre and uniformity of its fiber. It is called the 'brown paper bag' as it is also used to store rice, wheat, grains, etc.

Jute matting is used to prevent flood erosion while natural vegetation becomes established. For this purpose, a natural and biodegradable fiber is essential. 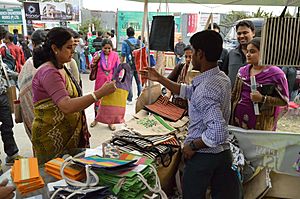 Jute is the second most important vegetable fiber after cotton due to its versatility. Jute is used chiefly to make cloth for wrapping bales of raw cotton, and to make sacks and coarse cloth. The fibers are also woven into curtains, chair coverings, carpets, area rugs, hessian cloth, and backing for linoleum.

While jute is being replaced by synthetic materials in many of these uses, some uses take advantage of jute's biodegradable nature, where synthetics would be unsuitable. Examples of such uses include containers for planting young trees, which can be planted directly with the container without disturbing the roots, and land restoration where jute cloth prevents erosion occurring while natural vegetation becomes established.

All content from Kiddle encyclopedia articles (including the article images and facts) can be freely used under Attribution-ShareAlike license, unless stated otherwise. Cite this article:
Jute Facts for Kids. Kiddle Encyclopedia.