In mathematics, bag is another name for a multiset. 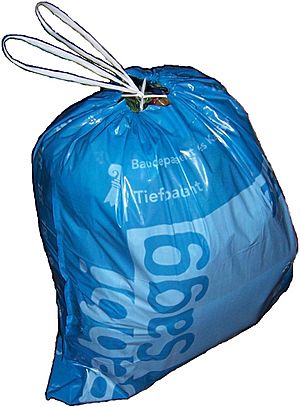 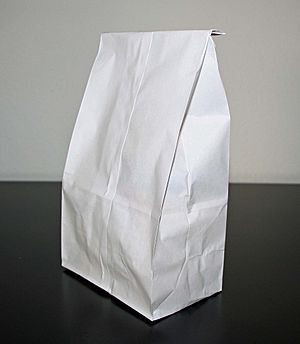 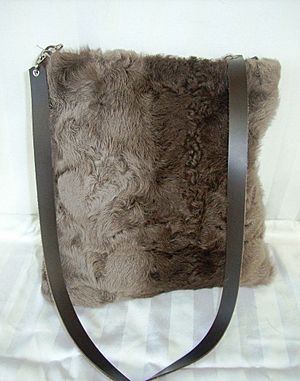 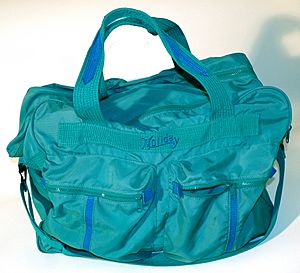 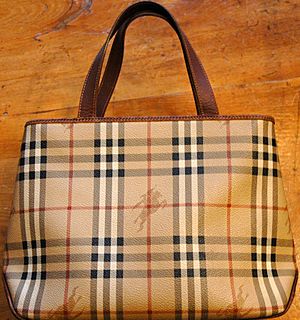 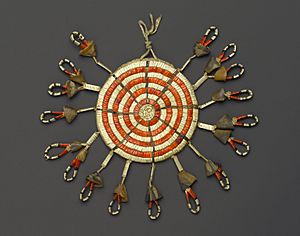 A bag (also known regionally as a sack) is a common tool in the form of a non-rigid container. The use of bags predates recorded history, with the earliest bags being no more than lengths of animal skin, cotton, or woven plant fibers, folded up at the edges and secured in that shape with strings of the same material.

Despite their simplicity, bags have been fundamental for the development of human civilization, as they allow people to easily collect loose materials such as berries or food grains, and to transport more items than could readily be carried in the hands. The word probably has its origins in the Norse word baggi, from the reconstructed Proto-Indo-European bʰak, but is also comparable to the Welsh baich (load, bundle), and the Greek βάσταγμα (bástagma, load).

Cheap disposable paper bags and plastic shopping bags are very common in the retail trade as a convenience for shoppers, and are often supplied by the shop for free or for a small fee. Customers may also take their own shopping bags to some shops. Although paper had been used for purposes of wrapping and padding in ancient China since the 2nd century BC, the first use of paper bags (for preserving the flavor of tea) in China came during the later Tang Dynasty (618–907 AD).

Bags have been around for hundreds of years and have been used by both men and women. Bags have been prevalent as far back as ancient Egypt. Many hieroglyphs depict males with bags tied around their waist. The Bible mentions pouches, especially Judas Iscariot, carrying one around, holding his personal items. In the 14th century, wary of pickpockets and thieves, many people used drawstring bags, in which to carry their money. These bags were attached to "girdles" via a long cord fastened to the waist.

Women also wore more ornate drawstring bags, typically called hamondeys or tasques, to display their social status. The 14th-century handbags evolved into wedding gifts from groom to bride. These medieval pouches were embroidered, often with depictions of love stories or songs. Eventually, these pouches evolved into what is known as a chaneries, which were used for gaming or food for falcons. During the Renaissance, Elizabethan England's fashions were more ornate than ever before. Women's wore their pouches underneath the vast array of petticoats and men wore leather pockets or bagges inside their breeches. Aristocrats began carrying swete bagges filled with sweet-smelling material to make up for poor hygiene.

In the modern world, bags are ubiquitous, with many people routinely carrying a wide variety of them in the form of cloth or leather briefcases, handbags, and backpacks, and with bags made from more disposable materials such as paper or plastic being used for shopping, and to carry home groceries. A bag may be closable by a zipper, snap fastener, etc., or simply by folding (e.g. in the case of a paper bag). Sometimes a money bag or travel bag has a lock. The bag likely predates the inflexible variant, the basket, and bags usually have the additional advantage over baskets of being foldable or otherwise compressible to smaller sizes. On the other hand, baskets, being made of a more rigid material, may better protect their contents.

An empty bag may or may not be very light and foldable to a small size. If it is, this is convenient for carrying it to the place where it is needed, such as a shop, and for storage of empty bags. Bags vary from small ones, like purses, to large ones for use in traveling like a suitcase. The pockets of clothing are also a kind of bag, built into the clothing for the carrying of suitably small objects.

There are environmental concerns regarding use and disposal of plastic shopping and trash bags. Efforts are being taken to control and reduce their use in some European Union countries, including Ireland and the Netherlands. In some cases the cheap bags are taxed so the customer must pay a fee where they may not have done previously. Sometimes heavy duty reusable plastic and fabric bags are sold, typically costing €0.5 to €1, and these may replace disposable bags entirely. Sometimes free replacements are offered when the bag wears out. A notable exception to this trend is the UK, where disposable plastic bags are still freely available and are dominant. This trend has spread to some cities in the United States.

A bag may or may not be disposable; however, even a disposable bag can often be used many times, for economic and environmental reasons. On the other hand, there may be logistic or hygienic reasons to use a bag only once. For example, a garbage bag is often disposed of with its content. A bag for packaging a disposable product is often disposed of when it is empty. Similarly, bags used as receptacles in medical procedures, such as the colostomy bag used to collect waste from a surgically diverted biological system, are typically disposed of as medical waste. Many snack foods, such as pretzels, cookies, and potato chips, are available in disposable single-use sealed bags.

All content from Kiddle encyclopedia articles (including the article images and facts) can be freely used under Attribution-ShareAlike license, unless stated otherwise. Cite this article:
Bag Facts for Kids. Kiddle Encyclopedia.