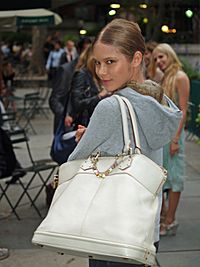 A handbag is a medium-to-large bag typically used by women to hold personal items. It is often fashionably designed. Versions of the term are 'purse', 'pocketbook', 'pouch', or 'clutch', terms which suggest rather smaller versions.

Content of handbags might include such items as wallet/coins, keys, mobile phone, cosmetics and jewellery, books/e-books, pen and paper, food and beverage such as a water bottle, tissues or a hairbrush.

Men once carried coin purses. The oldest known purse dates back more than 5000 years, and was worn by a man, Ötzi the Iceman. In early modern Europe, men's trousers replaced men's breeches during the 18th and 19th centuries. Pockets were added in the loose, heavy material. This let men carry coins, and then paper currency, in small leather wallets.

All content from Kiddle encyclopedia articles (including the article images and facts) can be freely used under Attribution-ShareAlike license, unless stated otherwise. Cite this article:
Handbag Facts for Kids. Kiddle Encyclopedia.