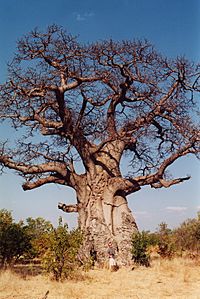 African baobab, as it looks for most of the year. 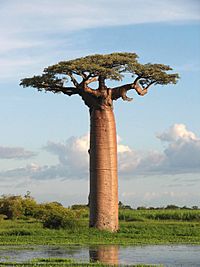 Baobab is the common name of a genus of trees (Adansonia). There are a total of eight types of its kind: six species live in the drier parts of Madagascar, two in mainland Africa, one in Australia and three in India. It is the national tree of Madagascar.

Baobabs are one of the largest and most important trees in all of where they grow, as they are able to provide shelter and wood. The leaves of the tree are used for making soup and the tree has some medicinal purposes in some regions of Africa for treating ailments such as wounds, diarrhea, asthma, fever, and malaria. 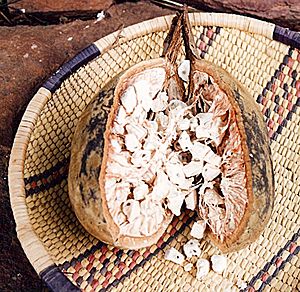 The fruit is about 18 cm long

The trees are long-lived, but just how long is disputed. The owners of Sunland Farm in Limpopo, South Africa have built a pub called "The Big Baobab Pub" inside the hollow trunk of the 22 metres (72 ft) high tree. The tree is 47 m (155 ft) in circumference, and is said to have been carbon dated at over 6,000 years old.

The baobab tree is known as the tree of life, with good reason. It can provide shelter, clothing, food, and water for the animal and human inhabitants of the African savannah regions. The cork-like bark and huge stem are fire resistant and are used for making cloth and rope. The leaves are used as condiments and medicines. The fruit, called "monkey bread", is edible, and full of vitamin C. As of 2010 experts estimate the potential international market at a billion dollars($US) a year.

The fruit has a velvety shell and is about the size of a coconut, weighing about 1.44 kilograms (3.2 lb). It has a somewhat acidic flavour, described as 'somewhere between grapefruit, pear, and vanilla'.

The tree can store hundreds of liters of water, which is an adaptation to the harsh drought conditions of its environment. The tree may be tapped in dry periods.

Mature trees are usually hollow, providing living space for many animals and humans. Trees are even used as bars, barns, wine and beer shops and more.

All content from Kiddle encyclopedia articles (including the article images and facts) can be freely used under Attribution-ShareAlike license, unless stated otherwise. Cite this article:
Baobab Facts for Kids. Kiddle Encyclopedia.