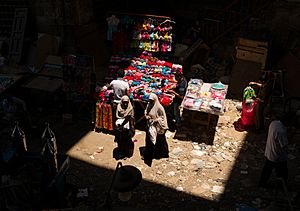 Two Egyptian women shopping at a market next to the Al-Ghouri Complex in Cairo, Egypt. 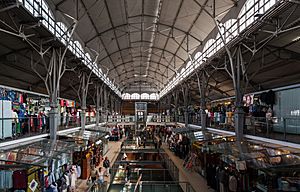 Shopping is an activity. People who go shopping visit shops. They may go to buy things, or just to look. Those people are called "shoppers"

In some places, shopping is considered an important activity or even a hobby.

There it is a television program called Shop till you drop. It is a gameshow for shoppers.

All content from Kiddle encyclopedia articles (including the article images and facts) can be freely used under Attribution-ShareAlike license, unless stated otherwise. Cite this article:
Shopping Facts for Kids. Kiddle Encyclopedia.