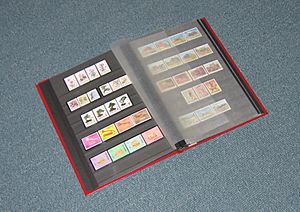 A hobby is a leisure activity that people do for fun or recreation. People do it because they like it. 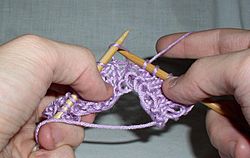 Some people do arts and crafts. They make clothing or decorations with their hands. Some popular arts and crafts that involve textiles or fabrics include crocheting, sewing (making clothing), embroidery, knitting, and quilting.

Some people like to do hobbies that involve making images on paper, such as scrapbooking, painting, and drawing. Some people like to make three-dimensional decorations using clay or wood, in the hobbies of pottery, sculpture, wood carving, and woodworking.

Some other arts include movie-making, photography, and musical hobbies such as singing, playing musical instruments, and writing songs. 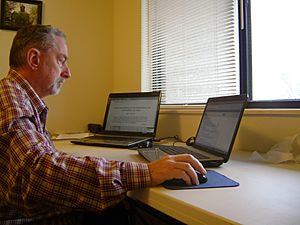 Writing articles for Wikipedia is a hobby for some people.

Some people enjoy spending their time reading books, magazines, and newspapers, or writing stories or in a diary. Other people enjoy learning foreign languages by taking classes, or doing research, such as genealogy.

In the 2000s, many people have Internet-based hobbies, such as editing Wikipedia, writing their own blogs, or having online discussions in Newsgroups or online forums. Some people enjoy computer activities, such as computer programming, learning about open source software, or playing computer games. Some people enjoy learning about electronics such as doing amateur radio broadcasts or building robots.

Hobbies in the home

Many people have hobbies that they do in the kitchen, such as cooking for their guests and family, and making their own beer. Many people also have hobbies in their home that involve animals, such as keeping a pet animal, such as a dog, a cat, or tropical fish. Some people even learn about dog breeding.

Collecting is a popular hobby in North America and in Europe. People enjoy finding interesting examples of different items and learning about them. Some of the well-known types of collecting include stamp collecting, coin collecting, video game collecting, trading cards such as baseball cards, and Pokémon cards. People also collect toys, books, comic books, and old records. Some people collect antiques and artwork, but these hobbies are more rare, because antiques and artwork are usually expensive.

A type of hobby that is related to collecting is model building. People who do model-building as a hobby collect small models which they build, paint, and then display. Some common types of model-building hobbies include model airplanes, model rockets, model ships, model cars, and model railways. 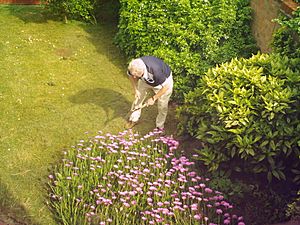 Many people spend a lot of time in leisure activities that are not necessarily called hobbies. Some people disapprove of spending time on these activities. These activities include watching too much television, drinking alcohol, and taking illegal drugs.

All content from Kiddle encyclopedia articles (including the article images and facts) can be freely used under Attribution-ShareAlike license, unless stated otherwise. Cite this article:
Hobby Facts for Kids. Kiddle Encyclopedia.