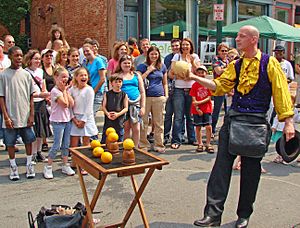 A magician performing on the street in Troy, New York.

Magic is the performance of tricks or the creation of illusions. It is a type of performing art that entertains audiences. It is done by a magician or an illusionist. The magician does things that look impossible or supernatural by ordinary means. Card tricks, disappearing beauties, pulling a rabbit from a hat, and sawing a person in half are examples of this kind of magic.

All content from Kiddle encyclopedia articles (including the article images and facts) can be freely used under Attribution-ShareAlike license, unless stated otherwise. Cite this article:
Magic (illusion) Facts for Kids. Kiddle Encyclopedia.