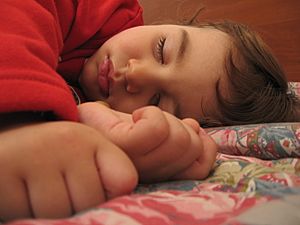 Dreams are what a person sees and hears in their mind when they are sleeping. They are often similar to real life in some ways, but can also be very strange. Dreams can seem so real while they happen that the person might think that they are awake when actually they are asleep.

Most people remember their dreams in some way or another, even if it's only a small part, but children are very likely to remember most of their dream clearly. It's often easier for people to remember dreams if they write down what happened in the dream just after they wake up. Because of this, many people have dream diaries where they describe each dream they have.

Nightmares are dreams which scare or shock people. Nightmares are usually based around that person's everyday fears, like spiders or dark places, but even a dream that's not about those things can feel unpleasant. Nightmares are caused by many different things: being uncomfortable or in pain while sleeping, sickness, stress, or even eating right before sleeping.

There are many different theories about why people dream and what their dreams mean. Every person has different dreams. Some psychologists believe that dreams reflect what is happening in the unconscious mind (the part of the mind that works by itself). Others think that people, places, and objects in dreams are symbols for other things in the dreamer's real life. Throughout history people have tried to make sense of dreams to learn things from them, and have often used them for divination or fortune-telling. Today there are still many books and websites devoted to making sense of dreams.

Generally speaking, ancient civilisations thought dreams were messages from the gods (see the works of Homer) or alternatively some kind of prophecy. However, they knew that often dreams misled the dreamer, and invented various explanations for this. Aristotle started off with ideas like this, but later became more skeptical, and denied the divine origin of dreams.

In his Interpretation of Dreams, Sigmund Freud connected them to his ideas on psychotherapy. Dreams, in Freud's view, are forms of "wish fulfillment". They are attempts by the unconscious to resolve a conflict of some sort. Because the information in the unconscious is in an unruly and often disturbing form, a "censor" in the preconscious will not allow it to pass unaltered into the conscious. Freud describes three main types of dreams: 1. Direct prophecies received in the dream; 2. The foretelling of a future event; 3. The symbolic dream, which requires interpretation.

Since Freud, the emphasis has been on the biology of dreaming.

The discovery of REM (rapid eye movement) and non-REM sleep has been important. Researchers have done many studies on this. Subjects have been woken up in both stages and asked what they were thinking about. It is clear that the reports from non-REM stages were different from REM stages. There is also some relationship between dreaming and daydreams. Both seem to occur in a cycle of 9-– 100 minutes.

Apparently, "there is no evidence that a more useful understanding of personality can be gained from them than can be divined from the realities of waking behaviour".

In other animal species

REM sleep and the ability to dream seem to be embedded in the biology of many animals in addition to humans. Scientific research suggests that all mammals experience REM. The range of REM can be seen across species: dolphins experience minimal REM, while humans are in the middle of the scale and the armadillo and the opossum (a marsupial) are among the most prolific dreamers, judging from their REM patterns.

Studies have observed signs of dreaming in all mammals studied, including monkeys, dogs, cats, rats, elephants, and shrews. There have also been signs of dreaming in birds and reptiles. Sleeping and dreaming are intertwined. Scientific research results regarding the function of dreaming in animals remain disputable; however, the function of sleeping in living organisms is increasingly clear. For example, sleep deprivation experiments conducted on rats and other animals have resulted in the deterioration of physiological functioning and actual tissue damage.

Some scientists argue that humans dream for the same reason other amniotes do. From a Darwinian perspective dreams would have to fulfill some kind of biological requirement, provide some benefit for natural selection to take place, or at least have no negative impact on fitness. In 2000 Antti Revonsuo, a professor at the University of Turku in Finland, claimed that centuries ago dreams would prepare humans for recognizing and avoiding danger by presenting a simulation of threatening events. The theory has therefore been called the threat-simulation theory. According to Tsoukalas (2012) dreaming is related to the reactive patterns elicited by encounters with predators, a fact that is still evident in the control mechanisms of REM sleep

All content from Kiddle encyclopedia articles (including the article images and facts) can be freely used under Attribution-ShareAlike license, unless stated otherwise. Cite this article:
Dream Facts for Kids. Kiddle Encyclopedia.