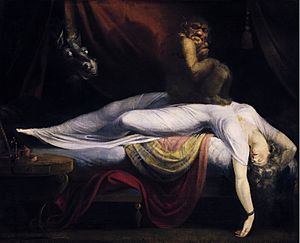 The Nightmare is a painting by Johann Heinrich Füssli (who was also known as John Henry Fuseli). He painted it in 1781

A nightmare is a very powerful dream that the sleeper finds disturbing or frightening. Nightmares usually have either physiological causes, like a high fever, or psychological ones, like trauma or stress in the sleeper's life. Nightmares are common, but nightmares that happen very often can cause problems with sleep. They may cause people to get medical help.

In earlier times, people thought that such nightmares were really the work of demons. They thought people were having nightmares because an Incubus was sitting on the chest of the sleeper. This can also be seen on the image. Sometimes people also thought magic and demonic possession were involved.

In the 19th century, people thought their diet was responsible. When Ebenezer Scrooge sees a ghost in A Christmas Carol, by Charles Dickens, he thinks "... an undigested bit of beef, a blot of mustard, a crumb of cheese, a fragment of an underdone potato..." is responsible. Similarly, the Household Cyclopedia (1881) offers this advice about nightmares:

"Great attention is to be paid to regularity and choice of diet. Intemperance of every kind is hurtful, but nothing is more productive of this disease than drinking bad wine. Of eatables those which are most prejudicial are all fat and greasy meats and pastry... Moderate exercise contributes in a superior degree to promote the digestion of food and prevent flatulence; those, however, who are necessarily confined to a sedentary occupation, should particularly avoid applying themselves to study or bodily labor immediately after eating... Going to bed before the usual hour is a frequent cause of night-mare, as it either occasions the patient to sleep too long or to lie long awake in the night. Passing a whole night or part of a night without rest likewise gives birth to the disease, as it occasions the patient, on the succeeding night, to sleep too soundly. Indulging in sleep too late in the morning, is an almost certain method to bring on the paroxysm, and the more frequently it returns, the greater strength it acquires; the propensity to sleep at this time is almost irresistible."

All content from Kiddle encyclopedia articles (including the article images and facts) can be freely used under Attribution-ShareAlike license, unless stated otherwise. Cite this article:
Nightmare Facts for Kids. Kiddle Encyclopedia.