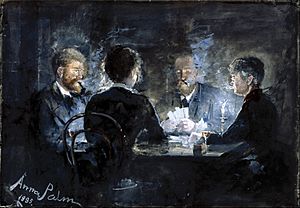 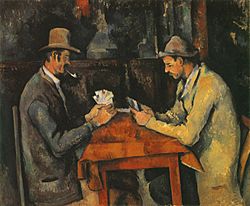 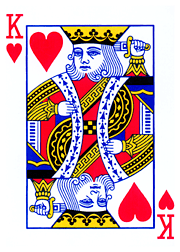 The King of Hearts

Playing cards is the name for the 54 cards used in card games like poker, bridge, blackjack, solitaire, and Go Fish.

There are 52 basic cards in a deck (not including the jokers). These cards have a suit and a number (called the value or rank). There are 4 suits and 13 ranks in each suit. There are also two Jokers that do not have a suit or a rank.

For many games, the Jokers are removed from the deck, making the total number of cards in the deck 52. Sometimes the deck is reduced to 40, 36, or 32 cards for playing certain games, like belote, sheepshead or euchre.

For the general article, see Tarot 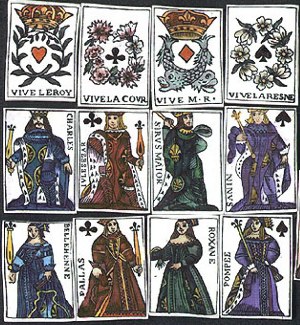 Playing cards first entered Europe in the early 14th century, probably from Egypt. The suits were very similar to the tarot suits of Swords, Staves, Cups and Coins. These designs are still used in traditional Italian, Spanish, and Portuguese card decks.

The first documentary evidence is from Vitoria-Gasteiz (now Spain) in 1334, in which the Knights of the Band are forbidden to play cards. The next record is from Catalonia in 1371. Wide use of playing cards in Europe can be traced from 1377 onwards.

The method of making cards has stayed the same for over a century. Cards are two thin pieces of paper stuck together with black paste. Both outer sides are printed. Inside is the design of the card face, the outer is the design for the pack as a whole. The black paste is essential to prevent sight of the face coming through when light shines on the face side. The use of the paste is the reason cards are sometimes called "pasteboards".

One or two packs at a time are printed on large sheets of paper, already pasted. The individual cards are stamped out by a machine which acts like a cookie-cutter. It cuts 36,000 cards per hour. A tiny fraction of a second later the edges of the cards are squashed extra-thin. This is not obvious to the naked eye, but the effect is that the cards slide easily past each other during shuffling.

Printed paper cards hold about 97.5% of the world market. Plastic cards do exist: they were first invented in the 1930s. They last longer than papercards, but have only 2.5% of the market.

All content from Kiddle encyclopedia articles (including the article images and facts) can be freely used under Attribution-ShareAlike license, unless stated otherwise. Cite this article:
Playing card Facts for Kids. Kiddle Encyclopedia.