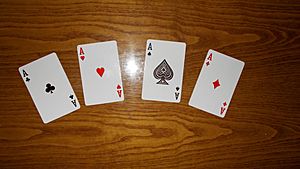 An ace is a playing card, die or domino which has a value of one. It used to mean the side of a die with only one dot. Since this was the lowest roll of the die, it was thought of as 'bad luck' in Middle English. The ace is often the highest playing card, so the meaning has changed to mean good.

All content from Kiddle encyclopedia articles (including the article images and facts) can be freely used under Attribution-ShareAlike license, unless stated otherwise. Cite this article:
Ace (card) Facts for Kids. Kiddle Encyclopedia.