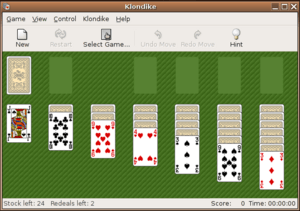 Solitaire is a card game for one player game using a deck of playing cards. A player wins the game when the player has all the cards in four different deck by color and number.

There are many variations (types) of solitaire, such as Klondike, Freecell, Pyramid, Golf and Spider. Most computer operating systems include simple solitaire games.

In many countries, solitaire is called Patience.

All content from Kiddle encyclopedia articles (including the article images and facts) can be freely used under Attribution-ShareAlike license, unless stated otherwise. Cite this article:
Solitaire Facts for Kids. Kiddle Encyclopedia.