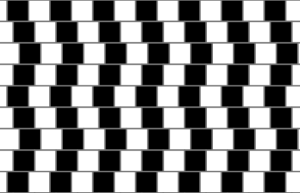 The café wall illusion: the horizontal lines are parallel, despite appearing to be at different angles to each other 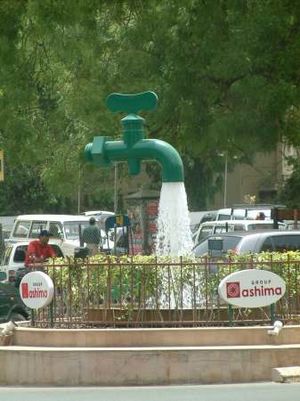 Illusionː The Flying tap fountain in Ahmedabad seems to hang in the air. In reality, there is a tube in the middle of the water, which supports it.

An illusion is a distortion of perception. The brain arranges, sorts, and organises data from the senses. Normally the system works well. Sometimes it does not, and we see illusions. In general, they are shared by most people in the same situation.

Illusions can happen with all five senses (taste, touch, sight, smell, and hearing), and some involve the way information from two senses is put together. Some illusions happen because of disorders, but generally, all normal people can sense the same illusion. An illusion is different from a hallucination; a halucination is sensing something which is not real, but an illusion is interpreting what we sense wrongly.

These are illusions which are heard. The person listening hears sounds that aren’t really there, or sounds that can’t really happen. A Shepard tone is an auditory illusion.

They are when a person feels something that is not there, or something that should not be there but feels like it is. This happens sometimes when a person loses their arm. The person still feels like the arm is there. They might want to scratch the arm, or the arm might hurt them. This can happen with any limb of the body, and it is called the phantom limb.

All content from Kiddle encyclopedia articles (including the article images and facts) can be freely used under Attribution-ShareAlike license, unless stated otherwise. Cite this article:
Illusion Facts for Kids. Kiddle Encyclopedia.