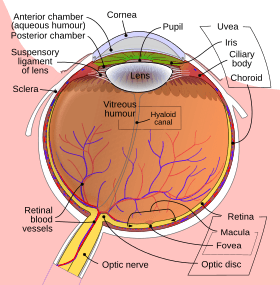 The human eye
The image projected onto the retina is inverted due to the optics of the eye. 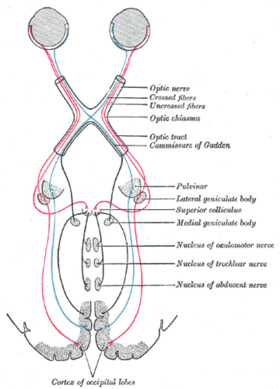 The visual system includes the eyes, the connecting pathways through to the visual cortex and other parts of the brain. The illustration shows the mammalian system.

The visual system is the part of the nervous system which allows organisms to see. It interprets the information from visible light to build a representation of the world surrounding the body. The visual system has the complex task of (re)constructing a three dimensional world from a two dimensional projection of that world. The psychological manifestation of visual information is known as visual perception.

Different species are able to see different parts of the light spectrum; for example, bees can see into the ultraviolet, while pit vipers can accurately target prey with their infrared imaging sensors.

All content from Kiddle encyclopedia articles (including the article images and facts) can be freely used under Attribution-ShareAlike license, unless stated otherwise. Cite this article:
Visual system Facts for Kids. Kiddle Encyclopedia.