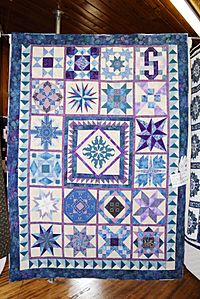 A patchwork quilt hanging up on display

A quilt is a type of blanket made of three layers: a top piece of cloth, a layer of insulating material often called batting, and a bottom piece of cloth for backing. The layers are joined together either by sewing or by tying the layers together with pieces of yarn, thread, or ribbon.

The top layer of the quilt can be made from many pieces of cloth sewn together in patterns, known as patchwork. Other patterns can be made by running lines of stitching through the three layers.

Sometimes quilts are not used as bedding, but are works of art made to be hung on a wall (wall hangings) or used as decoration.

Quilting is done in many cultures, such as the Amish, in Hawaii, and in India.

There are many traditions regarding the uses of quilts. Quilts may be made or given to mark important life events such as marriage, the birth of a child, a family member leaving home, or graduations. Modern quilts are not always intended for use as bedding, and may be used as wall hangings, table runners, or tablecloths. Quilting techniques are often incorporated into garment design as well. Quilt shows and competitions are held locally, regionally, and nationally. There are international competitions as well, particularly in the United States, Japan, and Europe. 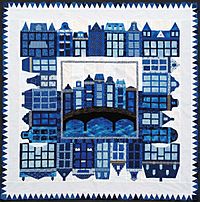 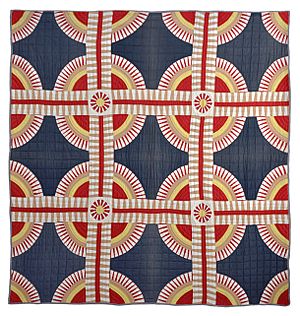 Quilting traditions are particularly prominent in the United States, where the necessity of creating warm bedding met the paucity of local fabrics in the early days of the colonies. Imported fabric was very expensive, and local homespun fabric was labor-intensive to create and tended to wear out sooner than commercial fabric. It was essential for most families to use and preserve textiles efficiently. Saving or salvaging small scraps of fabric was a part of life for all households. Small pieces of fabric were joined together to make larger pieces, in units called “blocks.” Creativity could be expressed in the block designs, or simple “utility quilts,” with minimal decorative value, could be produced. Crib quilts for infants were needed in the cold of winter, but even early examples of baby quilts indicate the efforts that women made to welcome a new baby.

A quilting bee in Central Park

Quilting was often a communal activity, involving all the women and girls in a family or in a larger community. There are also many historical examples of men participating in these quilting traditions. The tops were prepared in advance, and a quilting bee was arranged, during which the actual quilting was completed by multiple people. Quilting frames were often used to stretch the quilt layers and maintain even tension to produce high-quality quilting stitches and to allow many individual quilters to work on a single quilt at one time. Quilting bees were important social events in many communities, and were typically held between periods of high demand for farm labor. Quilts were frequently made to commemorate major life events, such as marriages.

There are many traditions regarding the number of quilts a young woman (and her family) was expected to have made prior to her wedding, for the establishment of her new home. Given the demands on a new wife, and the learning curve in her new role, it was prudent to provide her some reserve time with quilts already completed. Specific wedding quilts continue to be made today. Wedding ring quilts, which have a patchwork design of interlocking rings, have been made since the 1930s. White wholecloth quilts with high-quality, elaborate quilting, and often trapunto decorations as well, are also traditional for weddings. It was considered bad luck to incorporate heart motifs in a wedding quilt (the couples’ hearts might be broken if such a design were included), so tulip motifs were often used to symbolize love in wedding quilts. Quilts were often made for other events as well, such as graduations, or when individuals left their homes for other communities. One example of this is the quilts made as farewell gifts for pastors; some of these gifts were subscription quilts. For a subscription quilt, community members would pay to have their names embroidered on the quilt top, and the proceeds would be given to the departing minister. Sometimes the quilts were auctioned off to raise additional money, and the quilt might be donated back to the minister by the winner. A logical extension of this tradition led quilts being made to raise money for other community projects, such as recovery from a flood or natural disaster, and later, for fundraising for war. Subscription quilts were made for all of America's wars. In a new tradition, quilt makers across the United States have been making quilts for wounded veterans of the Afghanistan and Iraq conflicts.

William Rush Dunton (1868–1966), psychiatrist, collector, and scholar of American quilts incorporated quilting as part of his occupational therapy treatment. "Dr Dunton, the founder of the American Occupational Therapy Association, encouraged his patients to pursue quilting as a curative activity/therapeutic diversion...."

One of the primary techniques involved in quilt making is patchwork, sewing together geometric pieces of fabric often to form a design or "block." Also called piecing, this technique can be achieved with hand stitching or with a sewing machine.

Appliqué is a sewing technique where an upper layer of fabric is sewn onto a ground fabric. The upper, applied fabric shape can be of any shape or contour. There are several different appliqué techniques and styles. In needle-turn appliqué, the raw edges of the appliquéd fabric are tucked beneath the design to minimize raveling or damage, and small hand stitches are made to secure down the design. The stitches are made with a hem stitch, so that the thread securing the fabric is minimally visible from the front of the work. There are other methods to secure the raw edge of the appliquéd fabric, and some people use basting stitches, fabric-safe glue, freezer paper, paper forms, or starching techniques to prepare the fabric that will be applied, prior to sewing it on. Supporting paper or other materials are typically removed after the sewing is complete. The ground fabric is often cut away from behind, after the sewing is complete, in order to minimize the bulk of the fabric in that region. A special form of appliqué is Broderie perse, which involves the appliqué of specific motifs that have been selected from a printed fabric. For example, a series of flower designs might be cut out of one fabric with a vine design, rearranged, and sewn down on a new fabric to create the image of a rose bush. 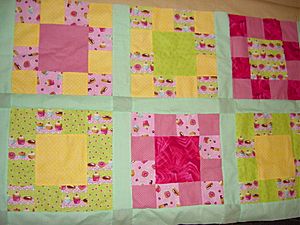 A key component that defines a quilt is the stitches holding the three layers together—the quilting. Quilting, typically a running stitch, can be achieved by hand or by sewing machine. Hand quilting has often been a communally productive act with quilters sitting around a large quilting frame. One can also hand quilt with a hoop or other method. With the development of the sewing machine, some quilters began to use the sewing machine, and in more recent decades machine quilting has become quite commonplace, including with longarm quilting machines.

Trapunto is a sewing technique where two layers of fabric surrounding a layer of batting are quilted together, and then additional material is added to a portion of the design to increase the profile of relief as compared to the rest of the work. The effect of the elevation of one portion is often heightened by closely quilting the surrounding region, to compress the batting layer in that part of the quilt, thus receding the background even further. Cording techniques may also be used, where a channel is created by quilting, and a cord or yarn is pulled through the batting layer, causing a sharp change in the texture of the quilt. For example, several pockets may be quilted in the pattern of a flower, and then extra batting pushed through a slit in the backing fabric (which will later be sewn shut). The stem of the rose might be corded, creating a dimensional effect. The background could be quilted densely in a stipple pattern, causing the space around the rose bush to become less prominent. These techniques are typically executed with wholecloth quilts, and with batting and thread that matches the top fabric. Some artists have used contrasting colored thread, to create an outline effect. Colored batting behind the surface layer can create a shadowed effect. Brightly colored yarn cording behind white cloth can give a pastel effect on the surface.

Additional decorative elements may be added to the surface of a quilt to create a three-dimensional or whimsical effect. The most common objects sewn on are beads or buttons. Decorative trim, piping, sequins, found objects, or other items can also be secured to the surface. The topic of embellishment is explored further on another page. 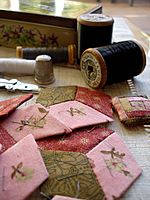 English paper piecing is a hand-sewing technique used to maximize accuracy when piecing complex angles together. A paper shape is cut with the exact dimensions of the desired piece. Fabric is then basted to the paper shape. Adjacent units are then placed face to face, and the seam is whipstitched together. When a given piece is completely surrounded by all the adjacent shapes, the basting thread is cut, and the basting and the paper shape are removed.

Foundation piecing is a sewing technique that allows maximum stability of the work as the piecing is created, minimizing the distorting effect of working with slender pieces or bias-cut pieces. In the most basic form of foundation piecing, a piece of paper is cut to the size of the desired block. For utility quilts, a sheet of newspaper was used. In modern foundation piecing, there are many commercially available foundation papers. A strip of fabric or a fabric scrap is sewn by machine to the foundation. The fabric is flipped back and pressed. The next piece of fabric is sewn through the initial piece and its foundation paper. Subsequent pieces are added sequentially. The block may be trimmed flush with the border of the foundation. After the blocks are sewn together, the paper is removed, unless the foundation is an acid-free material that will not damage the quilt over time.

All content from Kiddle encyclopedia articles (including the article images and facts) can be freely used under Attribution-ShareAlike license, unless stated otherwise. Cite this article:
Quilt Facts for Kids. Kiddle Encyclopedia.