Niʻihau (/ˈniːhaʊ/; Hawaiian: [ˈniʔiˈhɐw]) is the westernmost and seventh largest inhabited island in Hawaiʻi. It is 17.5 miles (28.2 km) southwest of Kauaʻi across the Kaulakahi Channel. Its area is 69.5 square miles (180 km2). Several intermittent playa lakes provide wetland habitats for the Hawaiian coot, the black-winged stilt, and the Hawaiian duck. The island is designated as critical habitat for Brighamia insignis, an endemic and endangered species of Hawaiian lobelioid. The United States Census Bureau defines Niʻihau and the neighboring island and State Seabird Sanctuary of Lehua as Census Tract 410 of Kauai County, Hawaii. Its 2000 census population was 160; Its 2010 census population was 170.

Elizabeth Sinclair purchased Niʻihau in 1864 for from the Kingdom of Hawaii and private ownership passed on to her descendants, the Robinson family. During World War II, the island was the site of the Niʻihau Incident: A Japanese navy fighter pilot crashed on the island and terrorized its residents for a week after the attack on Pearl Harbor. The people of Niʻihau are known for their gemlike lei pūpū (shell lei) craftsmanship, and speak Hawaiian as a primary language. The island is generally off-limits to all but relatives of the island's owners, U.S. Navy personnel, government officials and invited guests, giving it the nickname "The Forbidden Isle." Beginning in 1987, a limited number of supervised activity tours and hunting safaris have opened to tourists. The island is currently managed by brothers Bruce Robinson and Keith Robinson.

The island is relatively arid because it lies in the rain shadow of Kauaʻi, and lacks the elevation needed to catch significant amounts of trade wind rainfall. Niʻihau therefore, depends for its rain on winter Kona storms, when more northerly weather systems intrude into the region. As such, the island is subject to long periods of drought. Historical droughts on Niʻihau have been recorded several times, one in 1792 by Captain James Cook's former junior officer, George Vancouver, who had been told that the people of Niʻihau had abandoned the island because of a severe drought and had moved to Kauaʻi to escape famine. 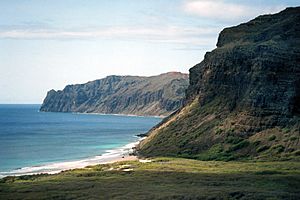 View of the rugged cliffs of windward Niʻihau (the northeastern shore)

As an arid island, Niʻihau was barren of trees for centuries — Captain James Cook reported it treeless in 1778. Aubrey Robinson, grandfather of current owners Bruce Robinson and Keith Robinson, planted 10,000 trees per year during much of his ownership of the island; Robinson's afforestation efforts increased rainfall in the dry climate. Island co-owner Keith Robinson, a noted conservationist, preserved and documented many of Niʻihau's natural plant resources. The island is designated as a critical habitat for the ʻōlulu, an endemic and endangered species of Hawaiian lobelioid. Aylmer robinsonii, a Pritchardia palm tree named for Keith Robinson's uncle Aylmer Robinson, is an endangered species native to Niʻihau.

Several bird species thrive on Niʻihau. Intermittent playa lakes on the island provide wetland habitats for the ʻalae keʻokeʻo (Hawaiian coot), the āeʻo (black-winged stilt), and the koloa maoli (Hawaiian duck). The critically endangered Hawaiian monk seal (Monachus schauinslandi) is found in high numbers on Niʻihau's shores. Robinson states that Niʻihau's secluded shoreline offers them a safe haven from habitat encroachments. According to Robinson, conditions there are better than the government refuges of the Northwestern Hawaiian Islands. When the Robinsons originally purchased Niʻihau, no monk seals were present, because they lived in the northwestern part of the Hawaiian island chain, Necker and Midway islands. They have been relocated to the main Hawaiian island chain by NOAA fisheries over the past thirty years, and some have found homes on Niʻihau. 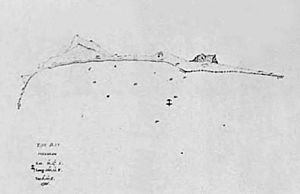 Prior to the unification of the Kingdom of Hawaii under Kamehameha I, Niʻihau was ruled by the aliʻi. Kahelelani was the first of the Niʻihau aliʻi. His name is now used to refer to the Niʻihau kahelelani, the puka shell of the wart turbans (Leptothyra verruca), used to make exquisite Niʻihau shell jewelry. Kāʻeokūlani was a ruler of northern Niʻihau who unified the island after defeating his rival, a chief named Kawaihoa. A stone wall (Pāpōhaku) across a quarter of the island's southern end marked the boundaries of the two chiefs: Kāʻeo's land was identified by black stones and Kawaihoa's by white stones. Eventually, a great battle took place, known as Pali Kamakaui. Kāʻeo's two brothers from the island of Maui, Kaiana and his half-brother Kahekili II, the King of Maui, fought for Kāʻeo and Niʻihau was united under his rule. Kawaihoa was banished to the south end of the island and Kāʻeo moved to the middle of the island to govern. Kāʻeo married the Queen Kamakahelei and a future king of Niʻihau and Kauaʻi named Kaumualiʻi was born in 1790. Kauaʻi and Niʻihau are said to have carried the "highest blood lines" in the Hawaiian Islands.

Kamehameha managed to unify all of the islands by 1795, except for Kauaʻi and Niʻihau: Two attempts to conquer those islands had failed, and Kamehameha lost many men: bodies covered the beaches on Kauaʻi's eastern shores. Finally, in 1810, Kamehameha amassed a great fleet, and Kaumualiʻi, the last independent aliʻi, surrendered rather than risk further bloodshed. Independence again became feasible after Kamehameha's death in 1819, but was put down when Kamehameha's widow Kaʻahumanu kidnapped Kaumualiʻi and forced him to marry her. Thereafter Niʻihau remained part of the unified Kingdom of Hawaiʻi. 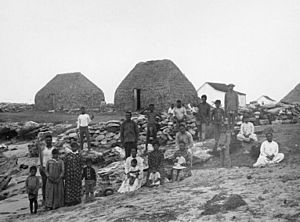 A group of villagers at Puʻuwai Beach settlement, Niʻihau in 1885. Photograph taken by Francis Sinclair, son of Elizabeth McHutchison Sinclair.

Elizabeth McHutchison Sinclair (1800–1892) purchased Niʻihau and parts of Kauaʻi from Kamehameha V in 1864 for $10,000 in gold. Sinclair chose Niʻihau over other options, including Waikīkī and Pearl Harbor. By around 1875, Niʻihau's population consisted of about 350 Native Hawaiians, with 20,000 sheep. This era marked the end of the art of Hawaiian mat–weaving made famous by the people of Niʻihau. Makaloa (Cyperus laevigatus), a native sedge, used to grow on the edges of Niʻihau's three intermittent lakes. The stems were harvested and used to weave moena makaloa (mats), considered the "finest sleeping mats in Polynesia". The mats were valued by aliʻi and foreign visitors alike, but by the end of the 19th century, Hawaiians had stopped weaving makaloa due to changes in population, culture, economics, and the environment.

Niʻihau played a small role during the attack on Pearl Harbor on December 7, 1941. In what has come to be called the Niʻihau Incident (or the Battle of Niʻihau), a Japanese pilot whose Zero had been hit crash-landed on the island hoping to rendezvous with a rescue submarine. The pilot escaped with the assistance of local Japanese residents, but was later recaptured and killed. It was the subject of a popular song, "You Can't Conquer Niihau, Nohow".

Despite its self-imposed isolation, Niʻihau has a long-standing relationship with the U.S. military dating from 1924. There is a small Navy installation on the island. No military personnel are permanently stationed there, but the U.S. military has used the island for training special operations units, which included hiring Hawaiians who live on Ni'ihau as "enemy" trackers.

The island of Niʻihau was considered as a possible location for the United Nations headquarters in 1944 by Franklin D. Roosevelt. Roosevelt had visited Hawaiʻi in 1934. Under Cordell Hull, Roosevelt's Secretary of State, the State Department seriously studied the proposal.

In 2004 President George W. Bush received all but one of the 40 votes cast on the island. The remaining vote was cast for Green Party nominee David Cobb. 51 registered voters did not cast ballots. In 2006 Dan Akaka received 33 votes in the 2006 Senate election to Cynthia Thielen's 3.i's 538 precincts to vote for John McCain over Barack Obama. McCain received 35 votes, Obama received 4, and Cynthia McKinney received 1. In the 2016 Presidential Election, nearly 60% of the vote went for Donald Trump. 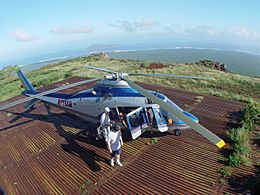 Navy contractors from PMRF arrive at Paniau Ridge on Niʻihau in an Agusta A109 helicopter. The seabird sanctuary island of Lehua can be seen in the background.

The 2010 census states that there were 170 people living on the island. However, witness accounts estimate that the population actually ranges between 30-70 people. Some support themselves largely by subsistence fishing and farming, while others depend on welfare. All residents live rent-free, and meat is free. Niʻihau has no telephone services and no paved roads. Horses are the main form of transportation; bicycles are also used. There are no power lines; solar power provides all electricity. There is no plumbing or running water on the island. Water comes from rainwater catchment. The Robinson family established most of these conditions. There is no hotel, and barges deliver groceries from Kauaʻi, often purchased by relatives, with free shipping.

Residents generally speak the Niihau dialect of Hawaiian as their first language, in part encouraged by terms in the original purchase contract which obligated the new owners to help preserve Hawaiian culture and tradition. The Niʻihau dialect differs from modern Hawaiian in that, for example, [t] and [ɾ] are the most common realizations of the phonemes /k/ and /l/. Niʻihau is the only island where Hawaiian is spoken as a primary language. Linguistic evidence and oral tradition maintain that the Niʻihau dialect is closer to the Hawaiian register spoken during the time of discovery. English is the second language.

Some residents have radio and television sets, although limited reception effectively limits the latter to watching VHS tapes and DVDs. Niʻihau is subject to regular droughts that occasionally force the population to evacuate to Kauaʻi temporarily, until rainfall replenishes their water supply. Residents commonly also commute to Kauaʻi for work, medical care, or school, and many of them call both islands home. To avoid a long boat ride, the island's owners maintain an Agusta A109 helicopter for emergencies and for transporting Navy contractors and residents to and from Kauaʻi. Helicopter tours and safaris help offset the costs of this service.

A form of ipu art is known to have developed solely on the island of Niʻihau. In this method, after a design is carved in the skin of a fresh gourd, it is filled with dye which, after several weeks, changes the color of the uncarved portions of the surface where the skin is intact. Hawaiian music plays a central role on the island, with a cappella singers making use of only two or three tones and changing rhythms. Ukulele and guitar playing is nearly ubiquitous among the islanders, and there are three separate styles of slack-key music, with an older style originating from Kohala.

The Hawaii Department of Education operates the Niʻihau School, a K-12 school. Academic subjects and computer literacy are combined with teaching students to "thrive from the land." The school is powered entirely by solar power. The number of students varies from 25 to 50 since families often travel between Niʻihau and Kauaʻi. Schoolchildren may stay with relatives in west Kauaʻi, where they attend one of two Niʻihau-focused public charter schools. At the Ke Kula Niʻihau o Kekaha school, students speak primarily the Niʻihau dialect through the early elementary grades, and then Hawaiian and English through grade 12. The school has a digital recording and video system, which helps to preserve and teach traditional Niʻihau and Hawaiian culture. At the other west Kauaʻi school, Kula Aupuni Niʻihau a Kahelelani Aloha (KANAKA), English is used in all grades, while still supporting the Niʻihau dialect. Both schools foster the culture, values, and spirituality of Niʻihau.

All content from Kiddle encyclopedia articles (including the article images and facts) can be freely used under Attribution-ShareAlike license, unless stated otherwise. Cite this article:
Niihau Facts for Kids. Kiddle Encyclopedia.