Kids Encyclopedia Facts
Not to be confused with Kawaii.

Kauaʻi or Kauai ( Hawaiʻian:) is geologically the oldest of the main Hawaiian Islands. With an area of 562.3 square miles (1,456.4 km2), it is the fourth largest of these islands and the 21st largest island in the United States. Known also as the "Garden Isle", Kauaʻi lies 105 miles (169 km) across the Kauaʻi Channel, northwest of Oʻahu. This island is the site of Waimea Canyon State Park.

Hawaiian narrative locates the name's origin in the legend of Hawaiʻiloa, the Polynesian navigator credited with discovery of the Hawaiʻian Islands. The story relates how he named the island of Kauaʻi after a favorite son; a possible translation of Kauaʻi is "place around the neck", describing how a father would carry a favorite child. Another possible translation is "food season".

Kauaʻi was known for its distinct dialect of the Hawaiian language; this survives on Niʻihau. While the standard language today adopts the dialect of Hawaiʻi island, which has the sound the Kauaʻi dialect was known for pronouncing this as. In effect, Kauaʻi dialect retained the old pan-Polynesian while "standard" Hawaiʻi dialect has changed it to the. Therefore, the native name for Kauaʻi was said as Tauaʻi, and the major settlement of Kapaʻa would have been pronounced as Tapaʻa. 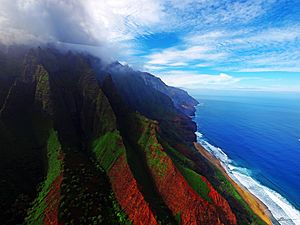 Kauaʻi's origins are volcanic, the island having been formed by the passage of the Pacific Plate over the Hawaii hotspot. At approximately six million years old, it is the oldest of the main islands. The highest peak on this mountainous island is Kawaikini at 5,243 feet (1,598 m).

The second highest peak is Mount Waiʻaleʻale (the wettest place on Earth other than the ocean) near the center of the island, 5,148 feet (1,569 m) above sea level. One of the wettest spots on earth, with an annual average rainfall of 1,170 centimetres (460 inches), is located on the east side of Mount Waiʻaleʻale. The high annual rainfall has eroded deep valleys in the central mountains, carving out canyons with many scenic waterfalls. On the west side of the island, Waimea town is located at the mouth of the Waimea River, whose flow formed Waimea Canyon, one of the world's most scenic canyons, which is part of Waimea Canyon State Park. At 3,000 feet (914 m) deep, Waimea Canyon is often referred to as "The Grand Canyon of the Pacific". Kokeo Point lies on the south side of the island. The Na Pali Coast is a center for recreation in a wild setting, including kayaking past the beaches, or hiking on the trail along the coastal cliffs. The headland, Kuahonu Point, is on the south-east of the island.

Kauaʻi’s climate is tropical, with generally humid and stable conditions year round, although weather phenomena and infrequent storms have caused instances of extreme weather. At the lower elevations the annual precipitation varies from an average of about 50 inches on the windward (northeastern) shore, to less than 20 inches on the (southwestern) leeward side of the island. Average temperature in Lihu'e, the county seat, ranges from 78 °F (26 °C) in February to 85 °F (29 °C) in August and September. Kauaʻi’s mountainous regions offer cooler temperatures and provide a pleasant contrast to the warm coastal areas. At the Kōkeʻe state park, 3,200–4,200 feet (980–1,280 metres) ASL, day temperatures vary from an average of 45 °F (7 °C) in January to 68 °F (20 °C) in July. In the winter temperatures have been known to drop down to the 30s and 40s at Kōkeʻe state park, which holds an unofficial record low of 29 °F (−2 °C) recorded in February 1986 at Kanaloahuluhulu Meadow.

Not only does Kauaʻi hold a record in average yearly precipitation, it also holds a record in hourly precipitation. During a storm on January 24–25, 1956, a rain gauge at Kauaʻi’s former Kilauea Sugar Plantation recorded a record 12 inches (300 millimetres) of precipitation in just 60 minutes. The 12-inch (300-millimetre) value for one hour is an underestimate, since the rain gauge overflowed, which may have resulted in an error by as much as an inch. An accurate measurement may have exceeded Holt, Missouri's world record 60-minute rainfall of 12 inches in 42 minutes on June 22, 1947.

In 1778, Captain James Cook arrived at Waimea Bay, the first European known to have reached the Hawaiʻian islands. He named the archipelago after his patron the 6th Earl of Sandwich, George Montagu.

During the reign of King Kamehameha, the islands of Kauaʻi and Niʻihau were the last Hawaiʻian Islands to join his Kingdom of Hawaiʻi. Their ruler, Kaumualiʻi, resisted Kamehameha for years. King Kamehameha twice prepared a huge armada of ships and canoes to take the islands by force, and twice failed; once due to a storm, and once due to an epidemic. In the face of the threat of a further invasion, however, Kaumualiʻi decided to join the kingdom without bloodshed, and became Kamehameha's vassal in 1810. He ceded the island to the Kingdom of Hawaiʻi upon his death in 1824.

In 1815–17, Kaumualiʻi led secret negotiations with representatives of the Russian-American Company in an attempt to gain Russia's military support against Kamehameha. After it was revealed that they did not have the support of Tsar Alexander I; however, the negotiations folded, and the Russians were forced to abandon all of their sites on Kauaʻi, including Fort Elizabeth.

In 1835, Old Koloa Town opened a sugar mill. From 1906 to 1934 the office of County Clerk was held by John Mahiʻai Kāneakua, who had been active in attempts to restore Queen Liliuokalani to the throne after the United States takeover of Hawaiʻi in 1893. 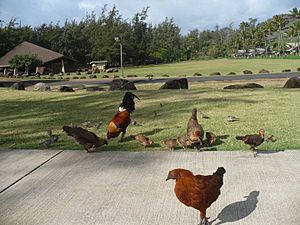 Some of Kauaʻi's feral chickens at Lydgate Beach Park

The city of Līhuʻe, on the island's southeast coast, is the seat of Kauaʻi County and the second largest city on the island. Kapaʻa, on the "Coconut Coast" (site of an old coconut plantation) about 6 miles (9.7 km) north of Līhuʻe, has a population of nearly 10,000, or about 50% greater than Līhuʻe. Princeville, on the island's north side, was once the capital of Kauaʻi.

Kauaʻi is home to thousands of wild chickens, or moa in Hawaiian, who have few natural predators, as the mongoose was never introduced in Kauaʻi as it has been on other Hawaiian islands. Kauaʻi's chickens originated from the original Polynesian settlers, who brought them as a food source. They have since bred with European chickens that have gotten free from farms and cockfighting breeders.

Kauaʻi is home to the U.S. Navy's "Barking Sands" Pacific Missile Range Facility, on the sunny and dry western shore.

HF ("shortwave") radio station WWVH, sister station to WWV and WWVB in Fort Collins, Colorado, is located on the west coast of Kauaʻi about 5 kilometres (3.1 miles) south of Barking Sands. WWVH, WWV and WWVB are operated by the US National Institute of Standards and Technology, broadcasting standard time and frequency information to the public.

The Kauaʻi Heritage Center of Hawaiʻian Culture and the Arts was founded in 1998. Their mission is to nurture a greater sense of appreciation and respect for the Hawaiʻian culture. They offer classes in Hawaiʻian language, hula, lei and cordage making, the lunar calendar and chanting, plus trips to cultural sites.

Kaua'i is home to many shave ice shops, a tradition in the islands. It is customary to leave the shop before you start to eat your shave ice, as not to drip on the floor. Typically, a scoop of ice cream - either macadamia nut or vanilla - is put at the bottom of the shave ice, something locals swear by. Sweetened condensed milk and li hing mui powder are both popular toppings. 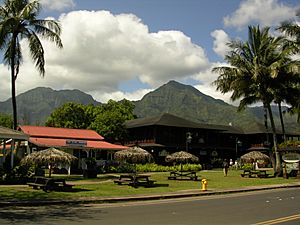 Hanalei town with a view of Mt. Na Molokama, and Māmalahoa 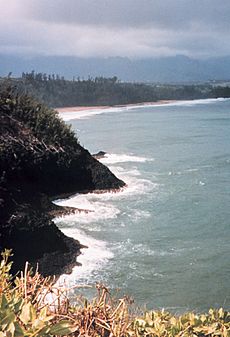 Northeastern coast of Kauaʻi, near Kīlauea

Cities and towns on Kauaʻi range in population from the roughly 9,500 people in Kapaʻa to tiny hamlets. The list below lists the larger or more notable of those from the northernmost end of Hawaii Route 560 to the western terminus of Hawaii Route 50

Located on the eastern end of the island, Lihue Airport is the aviation gateway to Kauaʻi. Līhuʻe Airport has direct routes to Honolulu, Kahului/Maui, the United States mainland, and Vancouver, Canada.

Other major highways that link other parts of the Island to the main highways of Kauaʻi are:

The Kauaʻi Bus is the public transportation service of the County of Kauaʻi. 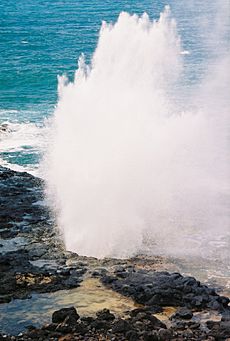 The Spouting Horn: located on the southern coast of Kauaʻi 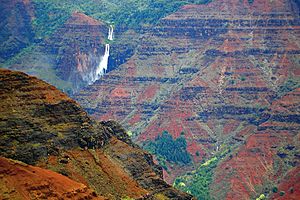 A view of the Hanalei Valley in Northern Kauaʻi. The Hanalei River runs through the valley and 60% of Hawaiʻi's taro is grown in its fields.

A view of the Nā Pali coastline from the ocean. It is part of the Nā Pali Coast State Park which encompasses 6,175 acres (20 km2) of land and is located on the northwest side of Kauaʻi.

The island of Kauaʻi has been featured in more than seventy Hollywood movies and television shows, including the musical South Pacific and Disney's 2002 animated feature film Lilo & Stitch along with its franchise's three sequel films (2003's Stitch! The Movie, 2005's Lilo & Stitch 2: Stitch Has a Glitch, and 2006's Leroy & Stitch) and first television series (Lilo & Stitch: The Series). Scenes from South Pacific were filmed in the vicinity of Hanalei. Waimea Canyon was used in the filming of the 1993 film Jurassic Park. Parts of the island were also used for the opening scenes of the Indiana Jones film Raiders of the Lost Ark. Other movies filmed here include Six Days Seven Nights, the 1976 version King Kong and John Ford's 1963 film Donovan's Reef. Recent films include Tropic Thunder and a biopic of Bethany Hamilton titled Soul Surfer. A scene in the opening credits of popular TV show M*A*S*H was filmed in Kauaʻi (helicopter flying over mountain top). Some scenes from Just Go with It and Pirates of the Caribbean: On Stranger Tides were also filmed in Kauaʻi. A Perfect Getaway is set in Kauaʻi.

Parts of the 2002 film Dragonfly were filmed there (although the people and the land were presented as South American) and the producers hired extras (at least three with speaking parts) from the ancient Hawaiʻian native population, which seeks to preserve its cultural heritage, including the pre-USA name of these two islands, Atooi or Tauaʻi.

Major acts of two Elvis Presley films, 1962's Blue Hawaii and 1966's Paradise, Hawaiian Style, were filmed at various locations on Kauaʻi. Both films boast scenes shot at the famous Coco Palms resort. Hurricane Iniki destroyed the Coco Palms and it was subsequently never rebuilt. However, Paradise, Hawaiian Style in particular, showcases the resort at its peak for posterity's sake. Coco Palms resort is now in the process of being torn down and rebuilt.

The Descendants, a film by Alexander Payne released in November 2011 and featuring George Clooney as lead actor, has major parts shot in Kauaʻi, where the main character and his cousins own ancestral lands which they are considering selling. The film is based on the 2007 novel by the Hawaiʻian writer Kaui Hart Hemmings.

All content from Kiddle encyclopedia articles (including the article images and facts) can be freely used under Attribution-ShareAlike license, unless stated otherwise. Cite this article:
Kauai Facts for Kids. Kiddle Encyclopedia.